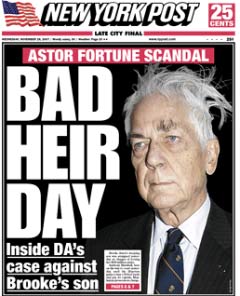 Anthony Marshall, the only son of New York society legend Brooke Astor, pleaded not guilty to 18 counts of criminal activity related to the handling of his mother's finances. The 83-year-old former Marine spoke in court once (to utter "not guilty") and, after his bond was approved, left the courthouse using a cane. He also apparently cried.

Among the accusations the Manhattan DA's office made against Marshall and his former lawyer Francis Morrissey (a PDF of the indictment is here): They stole $600,000 of Astor's money to pay for Marshall's vacation home; Marshall retroactively gave himself a raise of almost a million dollars (his job was managing his mother's money) without Astor's knowledge; they convinced Astor she was poor (when she had $120 million) and made her sell a beloved painting; they forged a codicil to her will that, in turn, benefited Marshall; they used Astor's money to pay Marshall's yacht captain and an employee in Marshall and Morrissey's theater production company, all without her knowledge; and Marshall stole two of Astor's paintings (which he later returned).

Manhattan DA Robert Morgenthau said, "Marshall and Morrissey took advantage of Mrs. Astor's diminished mental capacity in a scheme to defraud her and others out of millions of dollars."
Marshall's lawyer said his client would be exonerated, "Brooke Astor loved Tony, her only child, and whatever he received was in accordance with her wishes."

And Marshall's son, whose claims that his father was not taking proper care of Astor sparked interest in how he was managing her affairs, spoke to the Daily News. Philip Marshall said, "I sincerely hope there is a way justice can be achieved without my father going to jail."