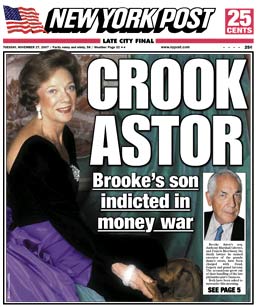 Dare we say that Brooke Astor is rolling in her grave? Yesterday, it was reported that her son Anthony Marshall and his former lawyer Francis Morrissey would be indicted for criminal activity over the handling of her will. And this morning, Marshall turned himself in at the Manhattan DA's offices, to face charges of fraud, forgery and grand larceny. Or, as DA Robert Morgenthau said, "The indictment charges that Marshall and Morrissey took advantage of Mrs. Astor's diminished mental capacity in a scheme to defraud her and others out of millions of dollars."

Marshall and Morrissey, who was actually disbarred over the mishandling of another client's estate, are accused of forging a codicil to Astor's will (which benefited Marhshall) and selling a beloved painting of Astor's without permission (Marshall got a $2 million commission). The indictment marks a climax in the saga of the socialite's estate ever since Marshall's own son claimed his father was mishandling Astor's care (the claim of elder abuse was later found by a judge to be unfounded) last year that then led to suspicions Marshall was mishandling Astor's estate - and denials from Marshall.

After various challenges about who should care for Astor, a settlement put the guardianship of Astor and her estate into the hands of JP Morgan Chase and her friend Annette de la Renta until Astor's death in August. Marshall, however, had the final say as he secretly buried his mother and said there was a "malicious jihad" against him.

Astor's estate is worth $162 million; just days after her death, challenges were made to her will. New York magazine recently had a feature about drama and the bottom line is that everyone seemed horrible.