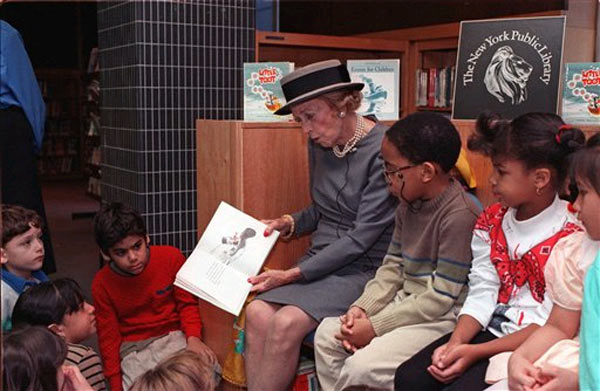 The city of New York is mourning the death of Brooke Astor. The philanthropist, who died yesterday at age 105, had channeled millions from her husband's fortune into a numbers of institutions and organizations - from Carnegie Hall to small community groups across all boroughs. The NY Times obituary makes a very good point about why the $195 million she donated through the Astor Foundation was so important: "Although the foundation was not large compared with powerhouses like Ford, Rockefeller and Carnegie, its contributions often served as seed money: others followed, knowing that if Mrs. Astor had given her seal of approval to a cause, it was worthy of support."

Former NYC Parks commissioner Gordon Davis told the Sun, "In 1978, the fiscal crisis was still upon the city, and one of the few people who was willing to give private funds to help dig us out, so to speak, was Brooke Astor." And NYPL president Paul LeClerc said, "Brooke was sort of legendary for saying hello and asking how the custodians were, how the secretaries were, how the guards were, how the clerical staff in the libraries were Â-- she was so kind and gracious and authentically interested in the welfare of the people who worked here." Mayor Bloomberg issued a statement yesterday saying:

“Today, we are all saddened by the loss of Brooke Astor, a quintessential New Yorker and one of the great philanthropists of our time. Tens of thousands of New Yorkers were the beneficiaries of Mrs. Astor’s good will and kind nature, many unaware of the origins of the donations. Her contributions reached a wide variety of causes; The New York Public Library, and the entire city, would not be what they are today without her gracious support.”

You can also read paid death notices from the NYPL (which also has it printed on its website) and Metropolitan Museum. Of course, the next chapter may involve her heirs fighting over her estate. Astor's will was changed a few times in recent years, shifting a significant amount of money to Anthony Marshall. The Sun speaks to a source who suggests that if anyone contests the will, it would be Astor's favorite charities, like the New York Public Library and Metropolitan Museum of Art.

The Observer's Frances Kiernan has a wonderful article - "Being Mrs. Astor" - which includes some of her accomplishments plus sayings (“Money is like manure, it should be spread around.") Also, here's the Wikipedia entry on Astor's life and an interview that Channel Thirteen WNET did with her - she said that Central Park was her favorite part of the whole city.