Yesterday afternoon, a man was mauled by a tiger after he jumped out of the Bronx Zoo’s Wild Asia Monorail and into a tiger den. The victim, who has now been identified as 25-year-old David Villalobos, was mauled by Bachuta, an 11-year-old male Amur tiger, around 3 p.m. Friday. His leg was mauled and his lung was punctured, among other injuries; sources told DNAInfo that Villalobos told people there he jumped in on purpose because "he wanted to die." “He’s amazing and he loves everybody,” the victim’s sister, who didn't give her name, told the News. “I really don’t know what happened.” 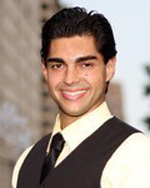 Villalobos, from Mahopac, was able to leap over a perimeter fence from the monorail, a feat the Zoo said had never been done before. “The tiger was asleep. But then the tiger started chasing him, and it chewed off his foot,” one worker who saw the attack firsthand told the Post. Emergency response staff were able to chase the tiger off using a CO2 fire extinguisher; once the tiger backed off, Villalobos was instructed to roll under a hot wire to safety.

Altogether, he suffered "various bites or puncture wounds on his arms and legs and also the top of his shoulder on his back," said Bronx Zoo Director Jim Breheny. He also suffered a broken arm and ankle, likely from the jump. Breheny was quick to point out that although they were ready to shoot the tiger if necessary, "the tiger did nothing wrong." "Tigers are extremely capable predators: They typically grab a prey animal by the back of the neck and it's over very quickly," Breheny said. "This cat did not do this to the individual."

“We’ve never had a single incident like this,” Breheny added. “You have to be determined to jump out.” Villalobs is still at Jacobi Hospital in serious condition. On his Facebook page, where he lists "Mother Earth" as his religion, he had posted a picture of a tiger on Thursday. A former classmate told NBC, "Recently I saw some of the stuff he wrote on Facebook and it seemed a little strange," Paul Giarraputo said. "He wrote a lot of deep emotional things—very religious, spiritual. I wouldn't say depressing. He was very in tune with his mind and religion."

#bronx
#bronx zoo
#david villalobos
#tiger den
#Tigers
Do you know the scoop? Comment below or Send us a Tip
A new Gothamist is coming! We’ve moved comments over to our beta site. Click here to join the conversation and get a preview of our new website.