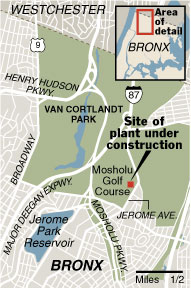 Ironically, the multi-billion dollar plan to build a subterranean water treatment plant in the Bronx's Van Cortlandt Park, which has been delayed by large projected cost overruns, is now accruing $30,000-a-day fines for the city. The New York Times reports that the Feds are applying the fines because work on the filtration plant has barely begun and the city hasn't even selected a primary contractor. In the city's defense, we'll note that it had a primary contractor, but that company backed out earlier this year after questions were raised about its inability to find minority- or female-owned subcontractors and a runner-up bidder was deciding if they wanted to take the work.

The Times describes how workers have been digging a giant hole underground for several months, yet the primary contractor for the project hasn't been chosen despite a court-mandated deadline of February. Dept. of Environmental Protection officials said a deal with a construction consortium would be finished by the end of the month and the $1.3 billion contract would be the largest in city history.

Some controversy is being generated over the choice of a law firm hired to monitor the project that was hired by the DEP itself, and may have a conflict of interest in overseeing widely expected cost overruns. The rebuttal to those critics is that the law firm in question has handled similar projects for the city in the past, including construction at the WTC site.

The Times article is a cavalcade of NIMBYism, state and federal squabbling, lawsuits, and environmental concerns about possibly the single-most important thing to New York's existence as a densely populated city: fresh water.