In Spanish, the word is “el acoso.” Harassment.

Last October, when Wanda Perez paid the rent for the Bronx apartment she’s lived in for 20 years, the superintendent handed her a receipt with “When are you leaving?” written on it.

Perez, a fortyish woman wearing a denim vest over a gold T-shirt, tells the story again June 18th, at a rally in a church gymnasium a few blocks away from her building at 2200 Aqueduct Avenue, a few blocks south of Fordham Road on the last ridge before the west Bronx slopes down to the Harlem River. “But I’m not going!” she says in Spanish, setting off a chant of “No Nos Vamos” to the beat of plaster buckets, drums, and pot lids.

The 56-apartment building is a blocky U-shape with a rectangular courtyard leading to the doors, typical of 1920s Bronx architecture. Its residents went without cooking gas for 18 months, getting it turned back on in March after a settlement between the city Department of Housing Preservation and Development and the landlords, Charles Rosenwasser and David Pilch of Brooklyn. HPD violation records for the last year show multiple complaints for no heat and no hot water in the entire building, and no electricity in several apartments.

There are huge holes in the walls with rats coming out, Sandra Rodriguez says in Spanish, and a neighbor has had to put nylon over the hole in her bathroom ceiling so her six children could take baths during the last six months. The front-door lock has been broken for more than 2½ months, in the police precinct that had the sixth-highest murder rate in the city in 2015.

“We don’t feel safe inside,” Wanda Maldonado, a Mexican immigrant holding a baby, says in Spanish. She says her cousin was stabbed in the hallway, and the door to a nearby apartment was set on fire. (In the last two years, police say, two grand larcenies have been the worst crimes reported in the building.)

Harassment is the biggest complaint neighborhood residents have about their housing, say organizers from the Northwest Bronx Community and Clergy Coalition, which coordinated the rally and a march to 2200 Aqueduct afterwards. Typical tactics include fraudulent rent surcharges and eviction attempts, failing to make repairs, threatening to call immigration enforcement agents, and, increasingly common recently, simply demanding that they leave.

People in 2200 Aqueduct have also been told that repairs wouldn’t get done if they called 311 to complain about problems in the building, says Marika Dias, a lawyer with Bronx Legal Services, which, together with the Legal Aid Society in a citywide project called the Tenants Rights Coalition, has been working with tenants there since September. 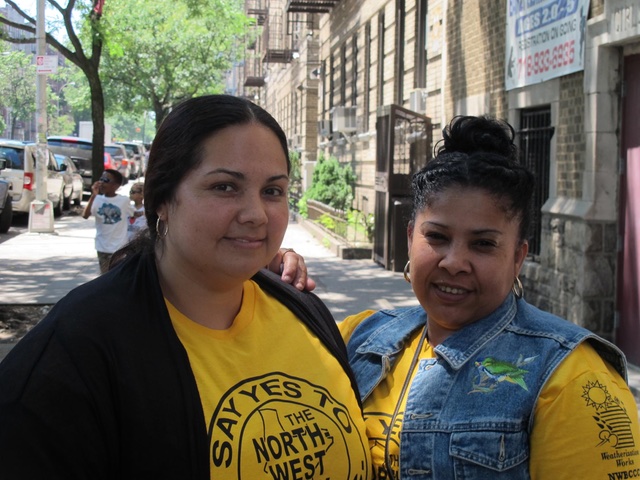 “They enter the apartment like it was their own,” Sandra Rodriguez says. She says she fell behind on the rent while the gas was out because she was spending extra money on food while she couldn’t cook, and the landlord told her, “if you don’t pay right now, you’ll have to leave,” in front of her 7- and 8-year-old sons. Rodriguez and her fellow tenants want to be reimbursed for the extra money they spent on food and heat while the gas was out.

HPD brought a civil case against the landlords, who had run up $335,000 in fines. It was settled for $25,000 in March, says Dias, with an agreement to turn the gas back on and correct the violations within 90 days. The Tenants Rights Coalition is now working with tenants to develop a legal strategy to deal with harassment and lack of repairs.

Perez and Maldonado say they want security cameras installed in the halls. (The Police Department doesn’t monitor security cameras, a spokesperson says.) The landlord has entered the building in the department’s “Safe Halls” program, in which officers patrol inside private buildings, but that’s a double-edged sword, says Dias. It requires giving the police a list of all building residents—something the tenants, some of whom are undocumented, “perceived as another attempt to intimidate them.”

The central and west Bronx is one of the main parts of the city that still has a large concentration of old-fashioned slumlords, owners who let buildings stay in disrepair. Two of the 18 Bronx buildings the Public Advocate’s office lists as having over 300 HPD violations are within four blocks of 2200 Aqueduct.

That doesn’t mean rent is cheap. One-bedroom apartments in the building and nearby now go for around $1,500 and two-bedrooms for $1,700. When a Northwest Bronx Coalition member asks the crowd at the rally—60 to 70 people, mostly Latino, some black, a few gray-haired whites—who’s spending more than 30 percent of their income on rent, virtually everyone raises their hand. About three-fourths live in a building where repairs haven’t been made, and half have gone without heat or hot water in winter.

“The whole community is having their rents raised,” says Perez.

The neighborhood is not gentrified. The restaurants under the 4 train on Jerome Avenue don’t serve artisanal gluten-free kale-infused cupcakes; they cater to Dominican, Mexican, Jamaican, and African immigrants. Few of the Saturday-morning shoppers on Fordham Road are white. Unlike in the Lower East Side, Crown Heights, or Bushwick, landlords can’t triple the rent by renovating vacant apartments for more upscale and whiter residents, but they still have an incentive to get people out. They can raise rents by 20 percent every time a tenant leaves. 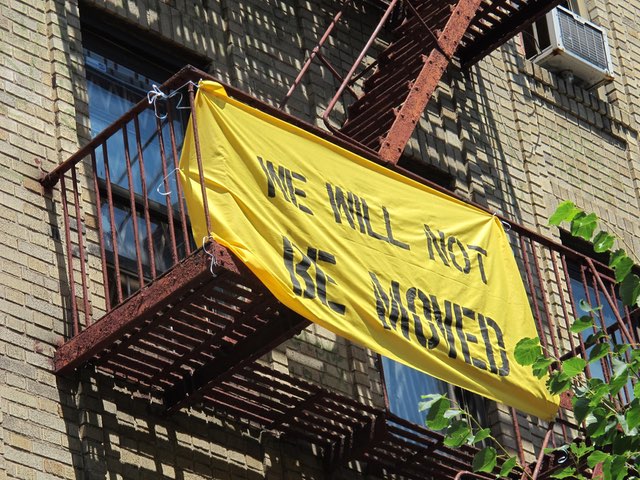 Low-income tenants are at a disadvantage anywhere in the city, says Dias. In a poor neighborhood, their landlords don’t make repairs. In a gentrifying one, they’re harassed to leave. And in between, “there’s a general incentive for landlords to displace tenants because they can get the vacancy increase.” If the market won’t command the full 20 percent, owners can give the new tenant a lower “preferential rent” and then raise it to the legal limit when the lease runs out.

Gentrification may be coming, however. The neighborhood is at the north end of the area along Jerome Avenue that Mayor Bill de Blasio wants to rezone for “affordable housing,” using trickle-down from luxury development to finance it. There are 73 blocks that would be included, “and I am on one of them,” Pastor Eddie Pierce of United Fellowship House tells the meeting. The community has four demands, he says: Real affordability; good jobs and hiring local residents; strong anti-harassment policies, “not just a little slap on the hand”; and real community engagement.

“Forty years ago the Bronx was burning,” Northwest Bronx Coalition board member Evelyn Rodriguez tells the rally. “Now that we have brought back investment, we are being pushed out.”

“It’s all rooted in a history of displacing us. We’re not viewed as human beings. It’s about money. Capital,” adds Yorman Nuñez, a goateed man with black eyeglasses. “The most revolutionary thing you can do to disrupt that pattern is stay.”