When 39-year-old Bradley Ballard was found naked on the floor of a mental health observation unit on Rikers Island last fall, his body was covered in feces and a rubber band was tied around his genitals. He had been held in isolation for seven days after making a lewd gesture at a female guard.

On June 3, the Medical Examiner declared Ballard’s death a homicide, finding that he had been denied access to medication despite being diagnosed with both diabetes and schizophrenia. The AP previously reported that while guards looked into Ballard’s cell repeatedly in the days leading up to his death, they declined to enter, and when his door was finally opened on September 10, Ballard was too weak to move. He only received one visit from mental health staff, which lasted about 15 seconds.

Ballard’s primary cause of death was listed as diabetic ketoacidosis, brought on by a lack of insulin. Thus far, however, no Correction officers have been fired or indicted in relation to Ballard’s death.

At the rally, members of the NYC-based Jails Action Coalition chanted, sang, and spoke to passers-by about Ballard’s death. Johnny Perez is an activist with JAC and a mental health advocate at the Urban Justice Center (UJC), which provides advocacy and legal assistance to vulnerable New Yorkers. “People who are responsive for upholding the law should also follow the law," argues Perez, who previously spent eight months at Rikers, including three months in solitary confinement.

Another JAC member lamented, “The system’s designed to hold everyone outside of it accountable.”

It is no secret that the Bronx District Attorney, Robert Johnson, has been reluctant to prosecute guards at Rikers, even when there is substantial evidence of negligence or misconduct.

In August 2012, Jason Echevarria, a prisoner in a special mental health ward, swallowed a ball filled with highly toxic disinfectant and detergent. Prison guards relayed this information to their supervisor and notified him when Echevarria began vomiting, but the Captain reportedly told them, “Don’t call me if you have a live breathing body.”

Despite that, the Bronx DA declined to prosecute the high-ranking officer, Terrence Pendegrass. In March, the U.S. District Attorneys Office arrested Pendergrass on a civil rights charge. He now faces up to ten years is prison.

In February, James Murdough "baked to death" in a Rikers Island cell because of a heating issue. A warden was demoted after the incident. 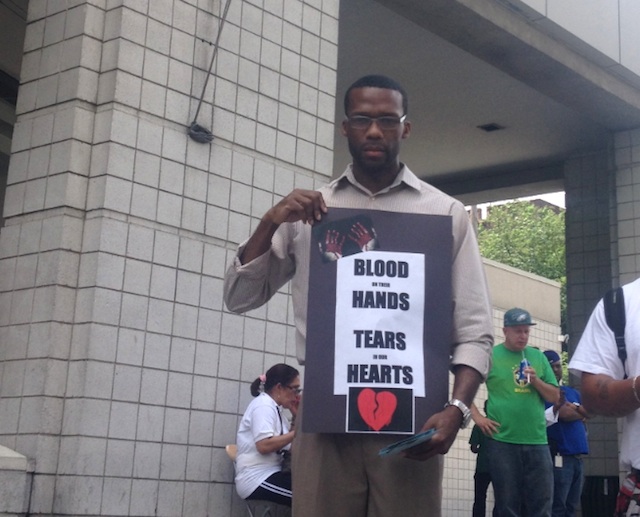 Although few people at the rally had kind words to say about Johnson, stronger support was voiced for Mayor Bill de Blasio and his newly appointed DOC commissioner, Joseph Ponte. When Ponte served as Commissioner of the Maine Department of Corrections, he reduced the use of solitary confinement by more than half.

Ponte’s appointment has put the DeBlasio administration at odds with the Correctional Officers’ Benevolent Association, who maintain that reducing the use of solitary confinement will put both guards and prisoners at risk.

But for JAC members and other NYC prison advocates, Ponte’s appointment was an important step in the right direction. Five Mualimm-ak survived several years in solitary confinement and is now a prominent prison activist in New York. “I am very hopeful that things will change,” he said. Mualimm-ak added that both DeBlasio and Ponte were willing to listen to community advocates and that they seemed to take the perspectives of formerly incarcerated individuals seriously.

On June 1, the mayor announced the creation of a task force to help reduce the rate of incarceration for New Yorkers living with mental illness.

About 40% of the 12,000 inmates at Rikers Island are mentally ill, and the jail uses solitary confinement at four times the national average.

Bradley Ballard was being held at Rikers after he violated his parole by returning to his native Texas and allegedly assaulting and exposing himself to Houston bus driver. Before being sent to the mental observation unit where he died, Ballard spent 38 days in a Correction Department psychiatric facility.

Jennifer Parish, the director of criminal justice advocacy at the UJC’s Mental Health Project, still has faith that Mr. Johnson will do the right thing in holding Rikers staff accountable for Ballard’s death. “I hope that our public officials recognize that people care about those who are incarcerated.”

At the end of the rally, Perez, Parish, Mualimm-ak and others hand-delivered a stack of letters to the Mr. Johnson’s secretary, in which they urged him to prosecute the staff responsible for Ballard’s care.

The Correction officers’ union declined to comment on Ballard’s case.

When asked why no Correction officers had been indicted in Ballard’s death, a spokesperson for the Bronx DA’s office said, “The investigation is ongoing.”

Aviva Stahl is a Brooklyn-based journalist who primarily writes about solitary confinement and local and national anti-prison organizing. Follow her @stahlidarity.

#bronx
#doc
#Joseph Ponte
#Rikers Island
#solitary confinement
#original
Do you know the scoop? Comment below or Send us a Tip