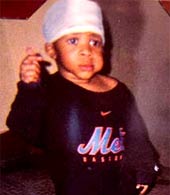 Aleshia Smith was sentenced to more than two and a half years in prison for the 2006 death of her 4-year-old son Quachaun Brown. Authorities believe that Smith's 18-year-old boyfriend Jose Calderon beat the child after he knocked over the TV set on Friday, January 27; last year, the NY Times wrote the Calderon "grabbed [Brown] by the ankles, swung him and hurled him into the wall" and recent reports noted Calderon used his fists, a belt, and a plastic bat to bet the child. Calderon allegedly continued to beat Brown throughout the weekend.

Smith and Calderon only called the paramedics about three days later on Monday, January 30, 2006, and doctors determined that Brown had been dead for hours. It was also revealed that Smith had been investigated by the Administration for Children's Services many times before Brown's death.

Last month, Smith had pleaded guilty to failing to get prompt medical attention for her son. Her lawyer said she accepted the plea deal because prosecutors may have made her children testify against her. A lawyer for Calderon, who has pleaded not guilty to murder, claims Smith had beaten her son and that Calderon tried to stop the abuse.

Last year, the Norwood News had an article about the wake and funeral for Brown and spoke to a neighbor who said, “Sometimes we can’t look to ACS to always be there. We as a community have to be there.”