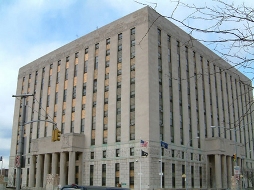 You'd think that the marriage bureau at the Bronx Supreme Court would have learned its lesson, after the Post wrote about it closing early (without permission), dashing the dreams of a couple. But the bureau seems to be back to its old tricks, as the Post reveals two couples were turned away even though they arrived well before closing time.

One couple had a relative present who needed to fly back to London. The other's couple groom, who is in the Navy and had to ship out to South Korea last night, said, "It was like 3:10, and she [a clerk] said, 'It's too late.' She said she was done for the day, and just walked away from us." The Post wrote:

The clerks quickly changed their tune when the press arrived as surprise wedding guests. Recognizing reporters as those who exposed their unauthorized office retirement party a few weeks ago, the city workers quickly sprung into action, working past their 4 p.m. closing.

We do love how reporters on the courthouse beat are stepping in. The city clerk's office says they are investigating the matter.

One reader made the wise observation that you should never arrive at any city agency even 2 hours before closing, because you never know. However, it's still ridiculous for the office to claim they are closed 45 minutes before their stated closing time. Maybe the NYC Marriage Bureau website needs to add "Please allow 1-2 hours additional time for processing."

#bronx
#bronx supreme court
#court
#london
#love
#News: NYC
#nyc
#south korea
#supreme court
#the city
#the office
#the post
Do you know the scoop? Comment below or Send us a Tip