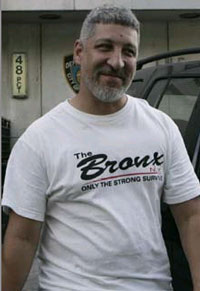 The two detectives who were shot during an early morning Bronx shootout yesterday managed to avoid serious injuries and the NYPD says it's a near miracle. Detectives Daniel Rivera and William Gonzalez, along with other three other cops, were trying to serve a warrant to a suspect in a bodega shooting when the suspect fired at them five times. Rivera's forehead was grazed and he left the hospital with only a scar - and smiles. Gonzalez was "nicked in the left shin."

The cops had been staking out the apartment in the Fordham section for two days. The suspect, Jermaine Taylor, had tried to escape the apartment by jumping out of a window (someone took out the AC unit). Taylor then tried to scale a fence, but fell. An 11-year-old witness told the Daily News, "He was limping and holding his side. The cops said, 'Freeze, mister!'" Taylor, whose pelvis was broken, fired five times from his 9mm, and Gonzalez fired five times and a third detective, Thomas Murphy, fired three times. Then Taylor got up and fired again, just missing Rivera, who then fired five times.

Mayor Bloomberg noted the close call, saying at the hospital where the detectives were, "A fraction of a degree of the gun, we would not be here relieved. We would be here praying." As part of protocol, the three detectives were given Breathalyzer tests (a move the Patrolman's Benevolent Association criticized), but the NYPD said the shooting seemed to be within department guidelines.

Taylor, who was remains in the hospital, was charged with attempted murder of a police officer and possession of a weapon. The police found three more rounds in his gun, but it seems that the gunfight ended because one of his fingers was "severed by one of the police bullets." The police found marijuana in the apartment, as well as pit bulls and a bathtub full of dog feces (Animal Care and Control took the dogs).