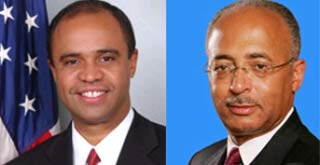 Just because the 2009 elections are over 22 months away doesn't mean some interesting moves can't happen. Adolfo Carrion Jr. (pictured, on left), the Bronx Borough President, has decided to run for City Comptroller in 2009, making it a tough field and shedding light on the mayoral contest.

Carrion, born in Lower Manhattan and a former city planner, Community Board district manager, and City Council member (here's his bio), was seen as a likely candidate in the mayoral race, but at a speech in front of the Association for a Better New York, he said, "I think this is the right decision for me at this time."

As for the mayoral race, now Thompson (pictured, on right) is the only minority candidate, likely going up against Congressman Anthony Weiner and City Council Speaker Christine Quinn in a Democratic primary. Baruch political science professor Doug Muzzio said, "It hurts Quinn and Weiner. It helps Thompson and whatever helps him hurts them." Thompson, for his part, said, "Adolfo Carrión has distinguished himself as a leader and an accomplished public servant. He would be a formidable candidate for any citywide position that he seeks."