As outrage has grown over the killing of 15-year-old Lesandro "Junior" Guzman-Feliz on a Bronx sidewalk, much of the anger has been directed at the bodega where the boy had attempted to get help. A petition has been started to shut down the store, and City Council members have also demanded its closure. Now the owner of the Cruz and Chiky Grocery claims he actually tried to hide Lesandro, allowing the teen to climb over the cash register counter, but the gang threatened him.

During a press conference, Modesto Cruz said he didn't understand what was happening, "We are scared at that moment. We are under panic. And the reaction is not what we're thinking now, what I can think we could do."

On June 20, Lesandro had ducked into the bodega, on the corner of East 183rd Street and Bathgate Avenue, while apparently being pursued by a group of alleged gang members. Surveillance videos showed the teen being dragged out of the store and then attacked by the suspects who wielded machetes. Bleeding from the gash in his neck, he died after walking towards St. Barnabas Hospital a couple blocks away. 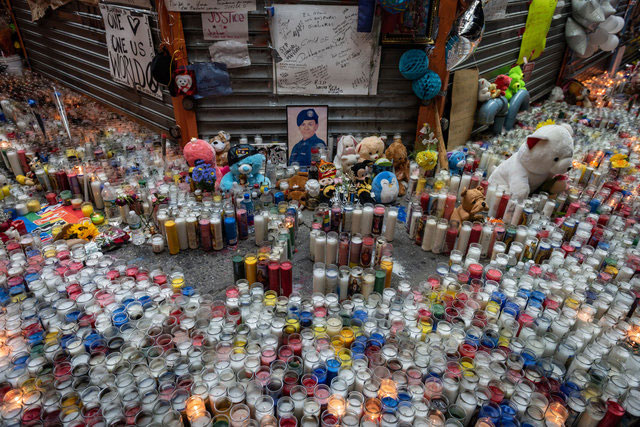 Lesandro's mother, Leandra Feliz, said last week, "I saw the video. Nobody helped him, not before and not after. The video that I saw, he went inside the grocery store, the killer was following him. He got inside first. They had to get inside. They could be preventing. They could [have] closed the door before the killer got inside but nobody closed it. Three of them, I saw the video, get inside with a weapon showing. Inside the grocery store more people were working there. They could’ve helped him."

Cruz shared video from inside the store that showed the boy rushing into the store and trying to climb over the counter. He said he didn't understand what was happening at the moment and initially thought he was being robbed, so he tried to stop Lesandro before then helping him over the counter. "When somebody go and jump all over the counter my first reaction was stop it. When he get down again and I recognized him and he came back again, so I tried to hold him I don't know what's going on. And when he told me they're looking for me, they're running for me, so I helped him bring him down," he recalled.

But then the group of men saw Lesandro and pulled him out from behind the counter and Cruz says that the suspects threatened him with a weapon as well.

One previously released surveillance video showed the injured teen going back into the store, but then leaving to go to the hospital.

Cruz said he called 911 twice but told Lesandro to go the hospital, which was close, because it was taking so long to get an ambulance. According to PIX 11, "Cruz said he immediately called 911 and spent four minutes on the phone while the operator repeatedly asked him questions. He said he made it clear an ambulance was needed at the bodega right away."

He also wanted to express his condolences to Lesandro's family, "I don't know how to explain in English. I just want his mother to understand that the pain is not only hers, we feel the pain, too. We are part of the community."

The bodega has been closed for the past week and has become the site of vigils in memory of Lesandro. WABC 7 reports, "As for if he plans to re-open, [Cruz] says that is up to the community to decide."

Eight men, all reportedly part of the Trinitarios, have been arrested and charged with murder. Investigators believe that Lesandro, who aspired to be a police detective, was the victim of a mistaken identity revenge plot. The NYPD is also conducting an internal investigation of how police officers in the precinct handled the situation, as one video appeared to show Lesandro bleeding to death with officers just standing around.

Leandra Feliz said last week on Good Day New York, "I want to say thank you to everyone who supported me," and added that in spite of her pain, "I want to be strong for him because I want justice."

#bodega
#bronx
#justice for junior
#Lesandro Guzman-Feliz
#murder
#trinitarios
Do you know the scoop? Comment below or Send us a Tip