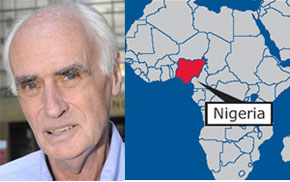 Not everyone losing their shirts these days can blame it on the market collapse; some unlucky investors have broker Michael Axel to blame. Despite his totally boss name, Axel was definitely not the guy to trust with your savings. And he's (allegedly) living proof that people do actually fall for that overseas e-mail scam, whereby someone you don't know, usually residing in Africa, e-mails you with some ridiculous offer that, to paraphrase Michael McDonald, only a fool believes. Axel was that fool, prosecutors say; he was arraigned Thursday on grand larceny and forgery charges and could get 15 years in prison.

Sometime in '05, Axel (who had already been ripping off clients for years) got an e-mail from a phony lawyer in Nigeria who had some good news. Axel had inherited $8.75 million from a distant relative! To collect, he just needed to send some "up front" money to cover legal fees. So Axel allegedly forged at least $600,000 worth of checks on four clients' accounts.

Here's the Frank Capra twist: One was a public high school teacher and the other three were elderly investors in their 80s and 90s. 400K allegedly came from a 92-year-old client in an assisted-living facility, and, according to the Post, an unspecified sum was stolen from an account shared by a mentally incompetent 83-year-old man and his daughter, who was dying of ovarian cancer.

The firm Axel worked for, Tripp & Co., says it has repaid the clients Axel ripped off and that Axel has repaid Tripp approximately 300K. The 69-year-old broker is out on bail until his next court date in November. Manhattan D.A. Robert Morgenthau told reporters yesterday, "This is a classic example of one con man taking another con man."