Low-level pot possession continues to be the number one cause of arrest in NYC; in 2011 the NYPD made 50,680 arrests for low-level marijuana offenses, and half a million have been arrested during the past 15 years. When asked about this incredible statistic, officials will often point to the "broken windows" policing strategy, which relies on a theory that arresting people for small offenses like pot possession preemptively thwarts criminals for whom smoking weed is just the tip of the iceberg. But a new study (in full below) from Human Rights Watch tells a very different story:

It's worth noting, again, that since 1977 marijuana possession in New York State has been decriminalized for amounts of 25 grams or less, as long as it's not in public view. In June, the Legal Aid Society filed a lawsuit against the city and the NYPD for ignoring an order from NYPD Commissioner Ray Kelly, commanding police officers to stop making misdemeanor arrests for small quantities of marijuana that come into "public view" during stop-and-frisks. Also in June, a bill in Albany that would further decriminalize small amounts of marijuana (making it a violation, not a misdemeanor) was shot down by Republicans. 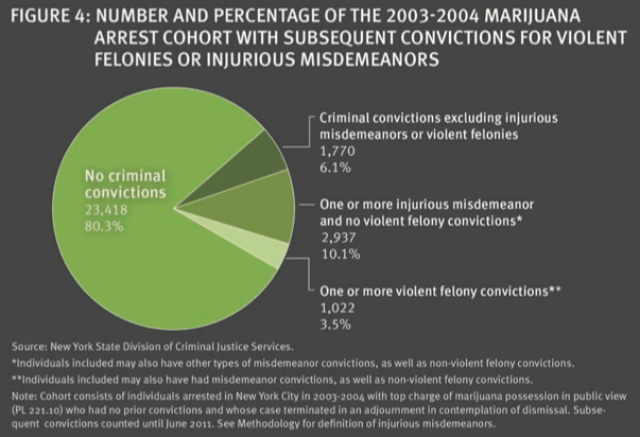 Bloomberg, Kelly, Cuomo, and the five district attorneys of New York City all supported the legislation, which may get a new shot at passing next year. Manhattan District Attorney Cyrus Vance has said, “The human cost to each one of these people and their families is serious and it is real.” As the Times persuasively argues in an editorial today, "Those arrested for minor possession — even if their cases are eventually dismissed — can endure grave collateral consequences. They can lose job opportunities, access to housing and can be turned away when applying for military service." The overwhelming majority of those arrested are black or Hispanic.

“As long as they keep arresting people, and making them pay such a heavy price for possessing marijuana in public view, New York City officials owe the public an explanation for how those arrests contribute to public safety, ” said Issa Kohler-Hausmann, co-author of the Human Rights Watch report. “If these arrests have crime control benefits that outweigh the costs, public officials have yet to identify them.”

A Red Herring: Marijuana Arrestees Do Not Become Violent Felons,

#broken windows
#marijuana
#marijuana legalization
#nypd
#pot
#original
Do you know the scoop? Comment below or Send us a Tip
A new Gothamist is coming! We’ve moved comments over to our beta site. Click here to join the conversation and get a preview of our new website.