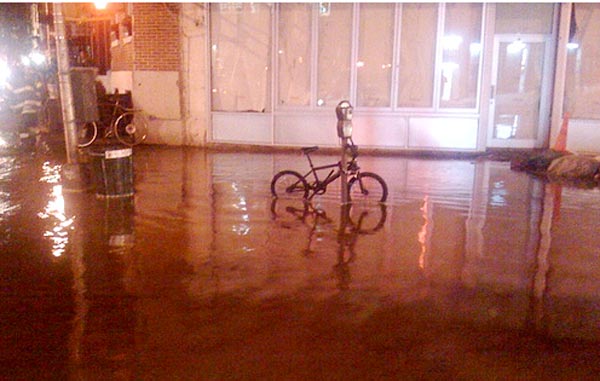 Photo by Erik Dane of The Foggy Monocle

The late Saturday night water main break in the West Village has left residents with water-damaged apartments and businesses in the lurch. A restaurant owner lamented about throwing away food and needing to be closed over the holiday weekend to the Daily News, "New Yorkers love to brunch and when there is a holiday weekend there is an extra day of brunch. We got hit really hard."

Residents and businesses were evacuated--some wore I [Heart] NY plastic bags to wade through the water. One basement apartment tenant described what happened in his home, "Most of my things were just bobbing in the water"--and said the water was three-and-half feet high. Another restaurant owner said while the venue wasn't damaged, "water was coming up brown" so they closed.

The Department of Environmental Protection says a 20-inch main under West 10th Street between 7th Avenue and Belecker was old. DEP First Deputy Commissioner Steve Lawitts said, "It's mostly a matter of age. Just from the number of years of freezing and thawing and other vibrations on the street, it will eventually break."

The DEP does try to replace old pipes, but they hadn't gotten a chance to replace this particular one. Though most people have been let back into their homes, clean up will continue.

#flooding
#water main break
#west 10th street
#west village
Do you know the scoop? Comment below or Send us a Tip