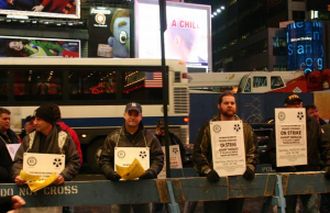 Unnamed sources are telling the Daily News and The Post that a deal between the stagehands’ union and Broadway producers is within reach. The two sides have an agreement on the main sticking point, the dispute over the number of stagehands required for a show’s “load-in” and are currently negotiating salaries. As one source put it, "Everybody is confident we can finally get this done." There’s even optimism that some shows affected by the strike could open as soon as Thursday night, after 19 days of darkness.

It’s not all rainbows and high-fives, though, as the Post’s Michael Riedel makes clear. After losing their shirts over Thanksgiving, producers eased up on their demands to change all the old work rules, which they say lead to stagehands on the clock with nothing to do. As an incentive to abolish the work rules, the producers had offered a 16.5% raise; now that they've caved on the work rules, they’re also insisting on a lower salary increase – and the union’s not having it. One union member told Riedel, "Their strategy was designed to put us on streets. In all labor negotiations, there is a price to pay for that."

While an end to the strike will be welcome news for tourists, the Broadway business community and those simply tired of hearing about it, some are bound to be less enthused – and not just pedestrians trying to walk down 45th street at 7:45pm. The eight shows that remained running during the strike because of separate contracts with the stagehands have been enjoying a dramatic rise in ticket sales. 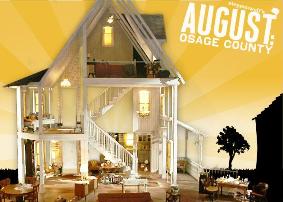 Variety reports that the biggest winner may be Young Frankenstein; panned by the Times when it opened just before the strike, the Mel Brooks spectacle is rumored to have grossed a record-setting $1.85 million for the week ending Nov. 25th. And other winners like Mary Poppins have seen a 21% spike in profits during the strike.

We'll just be relieved to see this resolved in time to save a particularly exciting Broadway season of straight plays, including Harold Pinter's The Homecoming, Tracy Letts's August: Osage County and Conor McPherson's The Seafarer, Aaron Sorkin's The Farnsworth Invention and Mark Twain's lost satire Is He Dead?.