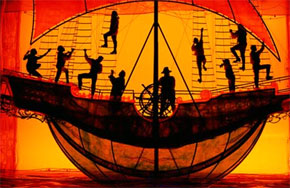 A performer in The Little Mermaid musical on Broadway broke both wrists after falling at least 20 feet through a trap door. Adrian Bailey, an ensemble performer who is also the understudy for King Triton, was taken to Bellevue Hospital and is in stable condition.

The accident occurred before the 2 p.m. matinee performance. At the beginning of the show, the NY Times explains a boat "starts out high above the stage and descends," with various performers playing sailors on it. Another ensemble member told the Times he heard that Bailey "fell into a trap door that should not have been open." The audience did not see the accident, though they did hear a thud, and the show began after a 1-hour delay.

According to the Daily News, the show's spokesman said the accident was the "result of human error" and "an unfortunate accident that had never happened before in over 150 performances."

Bailey is a Broadway veteran, and received the famous "Gypsy robe" in January, because he was the "Little Mermaid" cast member with the most Broadway credits. (Each musical receives the robe, decorating it and the passing to the next musical that opens ; Bailey passed the robe to Michael Balderrama of "In the Heights" in March.) Bailey was reportedly talking to friends who visited him in the hopsital, and Actors Equity said it would be investigating the incident.

#accident
#Adrian Bailey
#broadway
#Little Mermaid
Do you know the scoop? Comment below or Send us a Tip