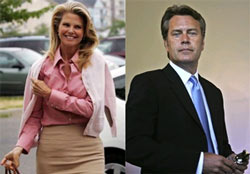 After yesterday's scathing testimony from a court-appointed psychiatrist, Christie Brinkley and Peter Cook may be working to settle the custody portion of their divorce battle in private. The model told reporters that she's "wanted to settle for two years."

Brinkley had been lobbying for sole custody for their two children, while Cook wants joint custody. Dr. Stephen Herman, who testified in Woody Allen and Mia Farrow's split, had described Cook, who Brinkley accused of ruining their marriage with his infidelity, as a narcissist with a huge ego--"Where most people need some quiet feeding with their egos, Mr. Cook has an insatiable appetite."--and recommended that Brinkley get sole custody. 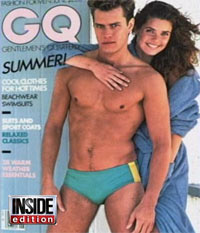 However, he said, "She needs to start working on therapy issues related to her parenting, maybe her choice in male figures with whom to get involved, certain motivations she has herself that can get her into trouble." Brinkley said she's not a fan of psychology, "But if Dr. Herman feels strongly about it, I would do whatever it takes to convince the court that I'm willing to make whatever changes they deem necessary."

Cook is an architect (he had an affair with an 18-year-old he met at a toy store and hired to be an assistant at his firm), but was once a male model--Inside Edition found this 1981 GQ cover which has a 22-year-old Cook posing with Carol Alt. If Brinkley and Cook settle custody, the next fight will be over property and some other belongings.

#affair
#christie brinkley
#custody battle
#divorce
#peter cook
Do you know the scoop? Comment below or Send us a Tip