A jury found two aides to NJ Governor Chris Christie guilty of conspiracy related to the politically vengeful shutdown of traffic lanes leading to the George Washington Bridge in 2013. Both have now vowed to appeal the convictions.

The NY Times reports, "The two defendants, Bridget Anne Kelly and Bill Baroni, were each charged with seven counts of conspiracy and wire fraud, including misusing the resources of the Port Authority of New York and New Jersey, which operates the bridge, and violating the rights of the citizens of Fort Lee, N.J., to travel without government restriction when the closings gridlocked their town over five days in September 2013."

Kelly was deputy chief of staff to Christie and Baroni was appointed to be deputy executive of the Port Authority by Christie. 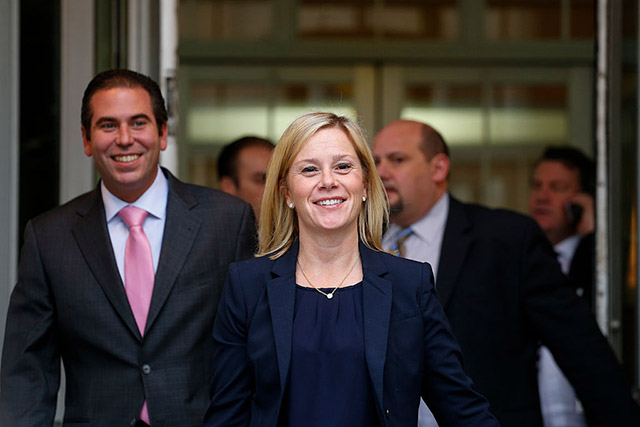 The 2013 scandal began when, prosecutors allege, Christie was angry that the Democratic mayor of Fort Lee, Mark Sokolich, refused to endorse Christie for reelection. David Wildstein, who Christie put in the Port Authority, and Kelly emailed each other about shutting down a lane in September, under the guise of a Port Authority traffic study. 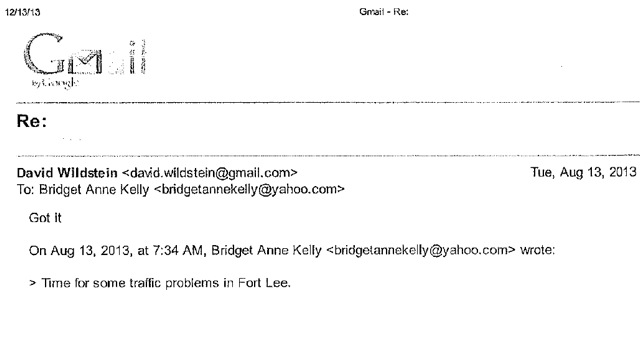 On September 9, 2013, Kelly actually emailed, "Time for some traffic problems in Fort Lee." As the U.S. Attorney's office points out, "To maximize the congestion and the punitive impact on Mayor Sokolich, the conspirators caused these lane and toll booth reductions to start on the first day of the school year without any advance notice to Mayor Sokolich, the Fort Lee chief of police or borough residents. The lane and toll booth reductions resulted in significant traffic in Fort Lee, for motorists intending to access the George Washington Bridge from local lanes and for residents, whose streets were choked with traffic."

Sokolich emailed the governor's office for help with the traffic issues, but he was ignored. One commuter told the Bergen Record, before it was revealed the lanes were deliberately shut down, "Other than after the 9/11 attacks, I've never seen such a fiasco of delays at the inbound, upper-level part of the bridge."

The lane shutdown occurred through September 13, and only because Port Authority Executive Director Patrick Foye, appointed by NY Governor Cuomo, called it off after he heard about it from a Wall Street Journal reporter.

Wildstein frantically emailed Kelly, "The New York side gave Fort Lee back all three lanes this morning. We are appropriately going nuts. Samson is helping us retaliate." Kelly replied, "What??" Samson is David Samson, Chairman of the Port Authority's Board of Commissioners and appointed by Christie... and who ultimately resigned. 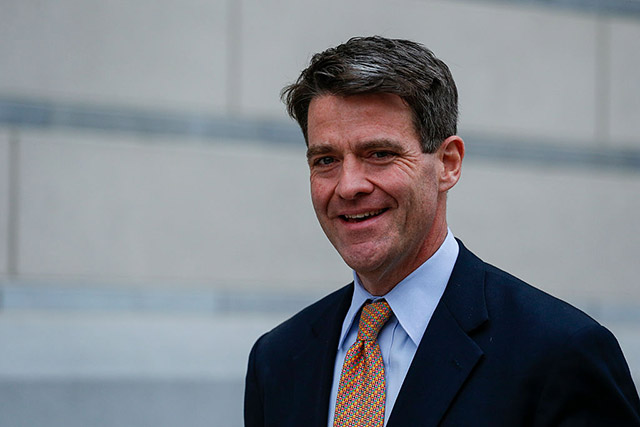 Baroni was accused of signing off on the plans and trying to stop Foye from reopening the lanes.

Wildstein took a plea deal and cooperated with the U.S. Attorney's office and testified against Kelly and Baroni. He faces up to 15 years in prison.

Earlier this week, defense lawyers had been trying to declare a mistrial over... something:

According to NJ.com, "If convicted, the two could face up to 20 years in prison, although under federal sentencing guidelines they would likely serve far less time if found guilty."

Christie, a Trump supporter whose chance to be his running mate was dashed by Bridgegate, has repeatedly denied any involvement in the bridge shutdown. During the trial, it was also revealed that NY Governor Cuomo may have known about the shutdown and discussed it with Christie and/or his staff.

Anyway, even Trump thinks Christie knew about it:

Christie is out campaigning for Trump as two of his aides are found guilty. Here's Trump on if Christie knew about the closure. #Bridgegate pic.twitter.com/L1A8sz1gy2

Both Kelly and Baroni will be appealing the verdicts:

Bill Baroni: "I am innocent" will appeal #Bridgegate pic.twitter.com/h6yA1uLHaR

"I told Bridget this is a first step in a process." pic.twitter.com/QSfTBSoxDd

Christie just released a statement, continuing his line about his staffers going rogue and having no idea about the plan:

Christie statement on the verdict pic.twitter.com/g7D5zkLIBI