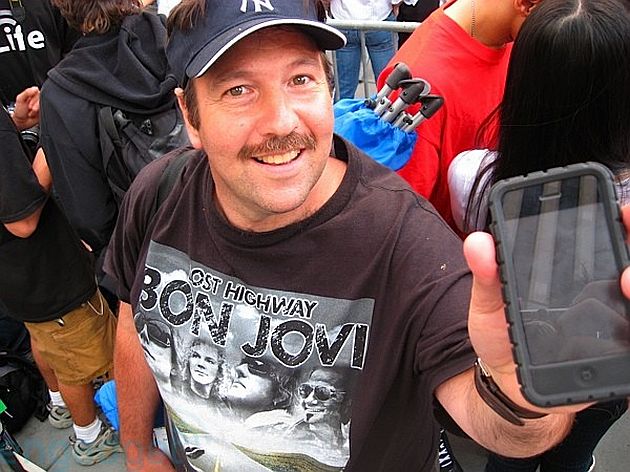 According to Engadget, it’s “an absolute zoo” at Apple's 5th Avenue store, as consumers surged forth at 8 a.m. to purchase the next generation of iPhone, the 3G. Some of them have been camping outside the store (and at Apple stores around the world) since last week to be the very first geeks to own the new cell phone, and, with it, a priceless sense of self-satisfaction.

The amount of yelling makes it seem like a riot could break out at any moment... While the line doesn't seem as long as last year, the feeling of desperation is considerably thicker... Apple employees are doing their ego-booster/cult thing by standing at the door and cheering like maniacs... About 15 minutes after it all began, customers are slowly trickling out with phones in hand. Here's wishing you good luck, AT&T network!

Though nothing could match the euphoria of the very first iPhone release last year, the 3G does have plenty of exciting new features (sort of), even if it falls a little short of the quintessential American cell phone that "makes pancakes and rubs your balls" described by the late George Carlin.

#3G
#apple
#iphone
#new
#release
Do you know the scoop? Comment below or Send us a Tip