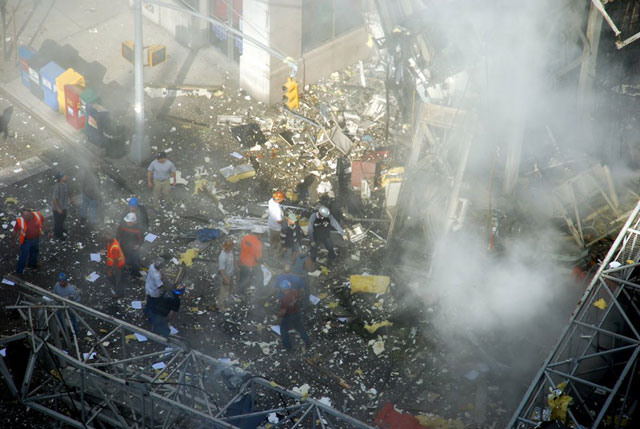 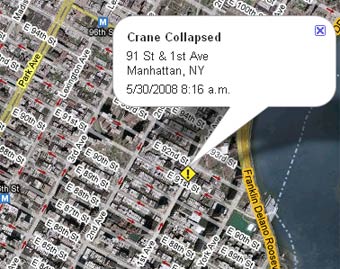 A crane collapsed at 1st Avenue and 91st Street on the Upper East Side around 8:15 a.m. According to initial reports, there are people trapped inside. There is wreckage on 91st Street, with FDNY and other emergency responder going through the rubble. The crane was located at a new construction site.

Crane safety and new construction has come under new scrutiny after the March 15 crane collapse that claimed the lives of 7 people--a civilian and six workers at a new condominium on East 51st Street. Earlier this week, the Department of Buildings announced that its inspectors will no longer be on site when cranes are built "or made taller". Per the NY Times, "Instead, inspectors will make spot checks of the crane raisings, known as jumps, and of safety meetings at which procedures for each jump must be laid out.

Update: The FDNY is reporting two fatalities at this point. Apparently the top of a crane--including the cab-- fell off (possibly 10 stories) and hit a building across the street (it looks like a penthouse across the street has a corner taken out of it). WABC 7 reports the crane may have been in full extension, snapped in half and hit the building. 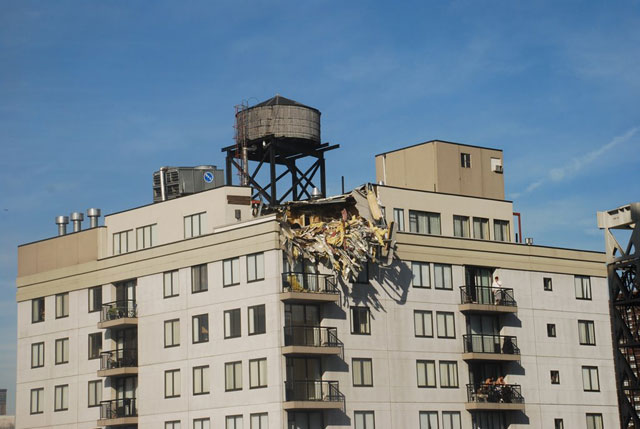 A Dateline producer, Ellen Sherman, who lives in the area, tells WNBC 4 that she heard a noise and thought to herself, "It's the crane." Also, WABC 7 doesn't think the wind was the cause, because the chopper is calm.

The under-construction building is the Azure (as Curbed suggested), which is supposed to be 34 stories high. It is located at 333 East 91 Street, or 1765 First Avenue--the northwest corner of 91st and First.

WCBS TV has two live webstreams of the crane collapse online. And Manhattan Borough President Scott Stringer said, "This is totally mind blowing. It looks like a bomb exploded in Manhattan. It's just a total tragedy."

Here's a link to the Department of Buildings listing on the building; a complaint on May 20 said, "CALLER STS THERE IS A CRANE APPROX 12 STORIES UP AND THERE IIS A PLATFORM THAT EXTENDS ACROSS SIDEWALK AND WELL INTO TRAFFIC WITHEQUIPMENT ON IT . LOCATION IS WEST SIDE OF 1 AVENUE APPROX 90 ST." It was inspected and the DOB deemed, "NO ACTION NECESSARY NO UNSAFE CONDITIONS ."

The cab operator, recently married, apparently survived. Now WNBC 4, after a conversation with some workers, is saying there was no load on the crane at the time and that the crane was stationary. Also, the crane jumping took place last week. Debris is scattered all over the intersection, and the NYPD says a beam landed three blocks away.

Now OEM says one person has died and at least two other people are in critical condition. More new info from WNBC 4's Tim Minton: This kind of crane has two cab operators--one was on the ground at the time of the accident (that worker is fine) but the worker who was in the crane did die. Also, two people not involve with the construction may have been injured.

The damaged building across from the Azure seems to be 1749 First Avenue (based on Duane Reade's locator, as there's a Duane Reade on the ground floor)-- the penthouse has a huge gash in it and there's a huge hole in the north side of the building, maybe six floors up. It's unclear if anyone in that building was injured. WNBC's Dan Rice says it seems like the turntable of the crane fell into the building, creating this hole that's about 2-3 stories high.

Mayor Bloomberg says the accident is "unacceptable." A construction worker told WABC 7 that the buildings inspector had checked out the site on Wednesday. A construction worker not affiliated with the site (he's working on the LES) suggested to WNBC that the crane might not have been properly balanced--he also said maybe DOB inspectors aren't paid enough to attract good people and that it's critical to pay attention to procedure and understanding structural issues.

UPDATE 10:14am: workers at the scene are stabilizing the remaining section of the crane, which is attached to the building with a collar. At the same time, helicopter shots are showing other personnel inspecting the turntable at the top-- that's got to be a scary place to be right now.

UPDATE 10:27am: NY1 is reporting that the demolished "penthouse" on the building across the street was actually the leasing office for the building, and because of how early the accident occurred, no one appears to have been inside.

And Mayor Bloomberg is scheduled to speak by 11:15 a.m.

Update 11:22 a.m.: Mayor Bloomberg, Governor Paterson, FDNY Commissioner Nicholas Scoppetta and OEM Commissioner Joseph Bruno are on the scene. Bloomberg says there was one fatality, two very seriously injured. All males, all construction workers. There was one pedestrian who suffered a minor injury. He said, "Our first concern is to stabilize the area. We've evacuated seven buildings as a precaution."

Governor Paterson said, "Our thoughts and sympathy and prayers go out to the family of the construction worker killed and the two who were injured." He also emphasized that residents were thankful for the emergency response.

When asked during the Q&A session, Bloomberg doesn't think anything's wrong at the Department of Buildings, "The DOB didn't crash. It was the crane that collapsed." He said, "Keep in mind construction is a dangerous business-- you'll always have fatalities...Two accidents do not make a pattern."

Acting DOB Commissioner Bob LiMandri says the crane was a tower crane (not the kind of crane used in the March 15 collapse). The crane went through the steps put into place by the DOB after the March 15 collapse--there was a pre-meeting in early April, the DOB was on scene when the crane was erected on April 21, the crane was jumped twice - 5/22 and 5/27 (Tuesday - and the DOB was present during both those times. He confirmed there was a complaint yesterday that about materials being hoisted over the street, which is a violation. LiMandri says it's unclear what the crane was doing during the time of the accident.

Details: The architect is James Davidson, the building is owned by 1765 First Associates, General Contractor Demattis Construction, the crane is owned by NY Crane and the Sabarro (sp?) concrete company rented the crane. LiMandri added that the DOB is in the midst of a $4 million program to review crane safety, excavation and concrete operations.

Mayor Bloomberg stepped in and said, "What has happened in unacceptable and intolerable," but added that it appeared the contractor and the DOB followed the rules.

Update 2:52p.m.: One of the injured people died; it is unclear what his injuries were, but there was one construction worker whose "chest [was] slashed open."