A man was shot in the head near 58th Street and 7th Avenue in midtown Manhattan. The FDNY says the victim, who is in his 20s, was shot just before 2 p.m. and taken to St. Luke's Roosevelt Hospital in "likely" to die condition.

The NYPD does not have any details about the shooting at this point. Some reports suggest that police are seeking a car that fled the scene.

According to WABC 7, "Sources said a suspect drove up in a car, shot the victim in the face and then sped away." The Daily News says the suspect was wearing a brown hoodie. 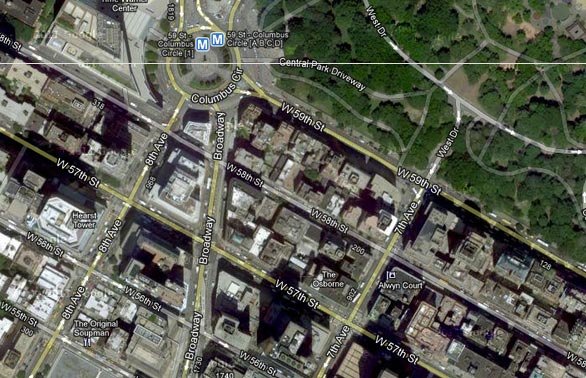 Update 3:05 p.m.: The victim has been pronounced dead. The NYPD says that they were called about an assault in progress and when they arrived, they found the victim shot in the head in front of 202 West 58th Street. The Post has a graphic image of the sidewalk with blood on it. 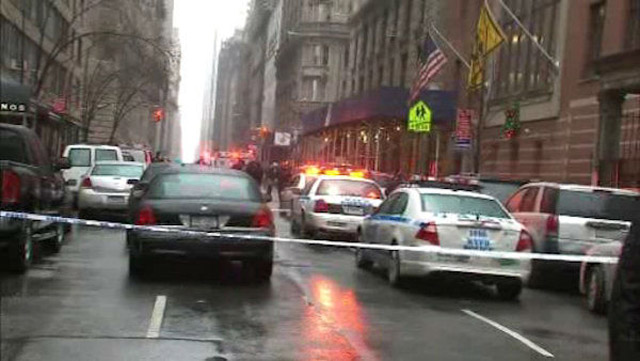 At approximately 2:00 pm this afternoon a M/B/31 whose identification indicates he is from Los Angeles, California was shot one time at close range to the back of the head by a M/B, unknown age, wearing a dark coat with hood and khaki pants, as the victim walked westbound on West 58th Street between 7th Avenue and Broadway. The gunman approached the victim from behind as both walked in front of 202 West 58th Street. After he fired, the assailant turned around and entered the passenger front seat of a parked light colored, possibly grey or silver auto. The car with an unknown driver proceeded eastbound on West 58th Street and south on 7th Avenue.

, "Witnesses said the shooting took place on the sidewalk on the south side of the street, near the main entrance to the [St Thomas Choir School], which serves third through eighth grades."

The police have identified the victim as Brandon Lincoln Woodard of Los Angeles, California.

#brandon woodard
#gun violence
#manhattan
#midtown manhattan
#shooting
#west 58th street
Do you know the scoop? Comment below or Send us a Tip