BREAKING: Limited Subway Service Returns Tomorrow (But Not Below 34th Street In Manhattan)

Gov. Andrew Cuomo announced this afternoon that limited subway service would return starting tomorrow—but not in lower Manhattan. "Buses are at full service today, limited commuter rail on Metro North and LIRR will begin at 2 p.m. today...limited NYC subway service, supplemented by a bus bridge from Brooklyn to Manhattan, will begin tomorrow," he said at a Hurricane Sandy update today. But there will be no service below 34th Street in Manhattan, because the power is still out. "Limited subway service will be restored to 14 of MTA system’s 23 lines tomorrow," he also tweeted.UPDATE WITH LINE INFORMATION BELOW 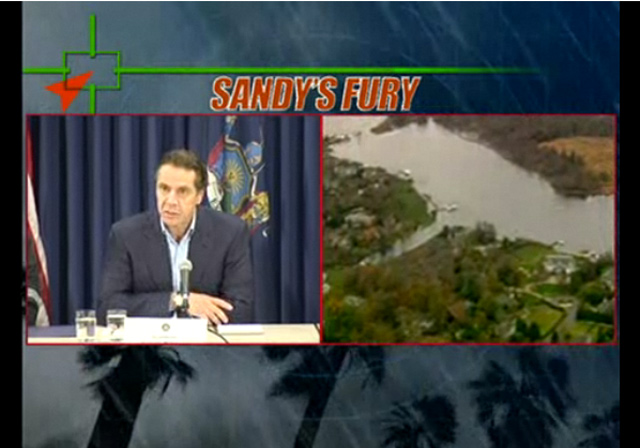 Cuomo preached "patience and tolerance" on traffic and power conditions, noting that it getting power back up for over a million NY state residents would be on a day-to-day basis. We'll update as we learn more information about exactly which subway lines will be back, and how the "bus bridge" will work—Mayor Bloomberg has another press conference scheduled for 1:30 p.m. at City Hall, which will likely provide more information about the subways.

Cuomo noted he had just completed a helicopter tour of the region with Sen. Chuck Schumer. Cuomo said that because water had filled the subway tunnels in many places, the city has been frantically working to get water out of the tunnels: "Con Edison has issues, because much of their equipment is in the tunnels. Getting water out of tunnels is the main order of business right now." Cuomo also gave credit to President Obama, who "has been on top of this situation, very informed, I've spoken to him several times myself...FEMA has been fanstaitc and responsive too."

Schumer also spoke about the destruction he saw during the helicopter tour: "It looks like the pictures of London or Dresden in World War II." Schumer called the damage a "national disaster" that "needs to be treated that way by every member of Congress." He also said: "The kind of thing we feared after 9/11, that lower Manhattan would become a ghost town, is happening for a few days."

Cuomo had some very strong words about the impact global warming had on this disaster: "Part of learning from this is the recognition that climate change is a reality...Anyone who says there's not a dramatic change in weather patterns I think is denying reality."

Update: MTA Chairman Joe Lhota says that three of the seven tunnels flooded under the East River have now been cleared. The three clear ones are the 4/5, 2/3 and F; it's not clear whether these routes will be those back tomorrow. The ones that are still wet are the R, A/C, L and 7; the MTA says that some of those trains could be shifted to other tunnels.

"We're going switch by switch, signal by signal, power substation by power station, and making sure everything is up and running," Lhota noted. "There will be more on Friday, more on Saturday. Our goal is every day to get our service back to normal." But he said there won't be any subways in lower Manhattan below 42nd Street until power is returned, which could take at least 3 days.

UPDATE: Here they are—the subways and commuter rails that are up and running, via Governor Cuomo's office:

As of 2:00PM today, the following is an up-to-date service status list of the MTA operating agencies including New York City Transit, Long Island Rail Road, Metro-North and Bridges and Tunnels.

A trains will operate in two sections making all local stops:
· Between 168th Street (Manhattan) and 34th Street-Penn Station
· Between Jay Street/MetroTech and Lefferts Blvd.

B and C service is suspended.

Both the Franklin Avenue and Rockaway Park S shuttles are suspended.