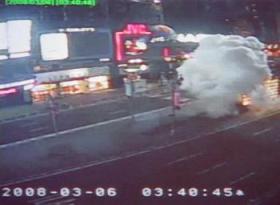 Some Capitol Hill offices received letters claiming responsibility for this morning's bombing in Times Square. WNBC reports that the letters, which arrived today, included a photo of the Army recruiting center "before it was bombed and...the words 'We did it.'"

According to the AP, Senator Dianne Feinstein's office sent this email to other lawmakers:

"A few offices on the House side have received a letter today addressed to 'Members of Congress' with a picture of a man standing in front of the Times Square recruiting station that was bombed in New York today with the statement 'We did it.' He is standing in front of it with his arms spread out and he's attached his political manifesto."

The email also advised people not to open the letters and contact the police.

Earlier, the police released police footage that shows a bicyclist near the building right before the explosion. It is believed the bicyclist placed the improvised explosive device that exploded at 3:45 a.m. There were no injuries, but the city was wounded in other ways. Mayor Bloomberg said, "Whoever the coward was that committed this disgraceful act on our city will be found and prosecuted to the full extent of the law. We will not tolerate such attacks."

UPDATE 9:47 p.m.: Whoa/weird - WNBC reports the authorities are "revisiting an incident that occurred along the Canadian border last month because they are concerned there might be a connection to the Times Square explosion." Why? Because four men fled a border checkpoint when Canadian officials attempted to question them. Two got away and one "left behind a backpack with photos of various New York City locations including Times Square" including one of the recruitment center.

Aware of this incident, the NYPD went to "various New York City businesses, including the Times Square recruitment center, to investigate if there had been any recent threats," but none had any. According to WNBC, a source described one of the men detained as "anarchist-types" and "stressed there is nothing to link the border incident to the explosion or the Capitol Hill letters at this time."

As for the letters, eight House Democrats representing NYC received letters; it's possible more were sent. After the jump, the email sent to Congress members:

Attention All Members of the Congressional Community

Within the past twenty-four hours, a number of letters have begun arriving at various Congressional Offices on Capitol Hill. The letters contain a reference to the military recruiting office in New York City. At this time, none of the letters received, have contained any threat to the Congressional Community or Members of Congress.

All of the letters have properly passed through Congressional mail security screening procedures before arriving at various Congressional Offices and have been determined to be safe.

These letters can be identified in the following manner:

* All envelopes received have all been manila in color and are approximately five inches by eight inches in size.
* All envelopes have two (one dollar) stamps affixed to them and a white label with a return address.

The United States Capitol Police want to preserve any possible evidence. Therefore, in the event that any envelopes arrive at your Congressional Office, please respond in the following manner:

1. Do not attempt to open the envelope.
2. Immediately contact the USCP Command Center at 22X-XXXX

The Command Center will have an officer dispatched to your office to take possession of the letter. Because this is an ongoing criminal investigation, please do not forward this email or release information outside your immediate office."

So much for not forwarding the email. The Capitol Police's statement said, "The U.S. Capitol Police and the FBI are working together to investigate letters received by various members of Congress. There is no established connection between these letters and the NYC Times Square incident this morning. The investigation is ongoing...more details as they become available."

According to a congressional staffer, the man in the photograph is in his 30s and has red hair. The letter had a Los Angeles return address, but "the staffer said it was not possible to determine if it was genuine."