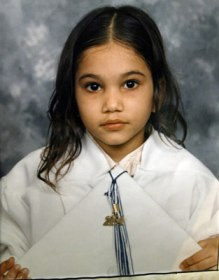 The jury deciding the fate of Cesar Rodriguez, accused of brutally killing his stepdaughter, had completed its third day of deliberations without a verdict yesterday, but this morning they have announced they have a decision. The AP reports they have found Rodriguez guilty of first-degree manslaughter; he will face up to 28 years in prison.

Prosecutors had argued that 7-year-old Nixzmary Brown died at the hands of Rodriguez and her mother Nixzaliz Santiago (Santiago will face a separate trial). Yesterday, the jurors asked the judge for the definition of second-degree manslaughter, which has a sentence of 15 years, which momentarily cheered the defense according to the NY Times. But minutes later, they asked for the definition of second-degree murder. (The Times points out "jurors are prohibited from carrying a written version of the charges to the jury room with them.")

The jurors, ten women and two men described as "grim-faced" by the Daily News, were complimented by the judge for their hard work. Even defense lawyer Jeffrey Schwartz said, "They must be working hard and they are very exhausted...I really have to commend this jury, whatever they come back on." It's been an exhausting trial overall - during some parts, jurors wept.

#abuse
#brooklyn
#Cesar Rodriguez
#deliberations
#jury
#nixzmary brown
Do you know the scoop? Comment below or Send us a Tip