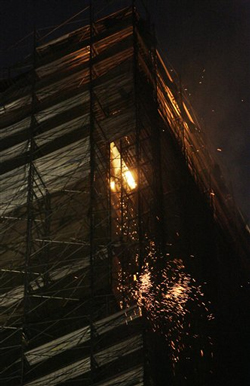 Smoke is once again drifting across the skyline of downtown Manhattan near the World Trade Center site as the Deutsche Bank building on Liberty St. has caught fire. Initial reports said that scaffolding was falling from the building, which is under deconstruction. The fire was recently upgraded to 5 alarms 7 alarms and multiple firefighters have been injured. Two firefighters were triaged and designated in need of immediate care with a life-threatening condition and at least one reportedly was receiving CPR on the scene. Another five were designated as needing urgent care. We'll report more when additional information becomes available. Yesterday The New York Times featured a slide show about the deconstruction of the Deutsche Bank Building.

Update:The New York Times is reporting that two firemen died while fighting the Deutsche Bank building blaze. One was 34-year-old firefighter Joseph Graffagnino, who suffered cardiac arrest on the scene. The cause of death of the other fireman has not been released and nor has his name depending on the notification of his family. Mayor Bloomberg was quoted as saying that there was "no danger" of collapse. Early reports said that area residents were being turned away from their homes due to the possibility of collapse and the danger of the toxic smoke emanating from the site. The mayor said that on-site air quality sensors reported no danger had been detected by numerous on-site sensors so far.

Onlookers watched as pieces of debris fell from the scaffolding and mesh-enshrouded building burned. Mayor Bloomberg was quoted saying that a full investigation to the cause of the fire would be underway as soon as it was fully extinguished. The Times reports that the fire was said to have begun between the 14th and 15th floors of the building. The deconstruction of the Deutsche Bank building was being done very elaborately due to the number of hazardous chemicals detected on the site, which was damaged beyond repair in the 9/11/01 attacks.

Update: Deconstruction work was halted for a week last year when a 22-foot-long section of pipe fell from one of the upper floors and went through the roof of a neighboring firehouse. That story included the scary detail that the subcontractor charged with bringing the building down had little experience in bringing down large towers in urban settings. And it's now being reported that the second firefighter fatality was due to smoke inhalation.