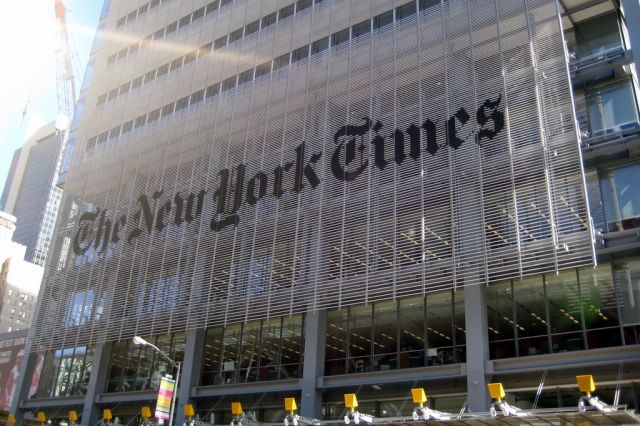 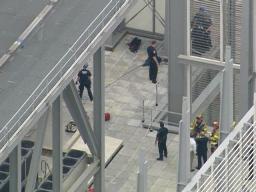 At approximately 11:57 a.m. a news alert came in saying there was a large crowd gathered at 620 8th Avenue and West 40th Street. "LEVEL 1 CALLED FOR CROWD CONTROL, AND A POSSIBLE PERSON ATTEMPTING TO JUMP DOWN FROM A BLDG." A reader wrote in minutes later saying, "Someone is climbing the exterior of the NY Times building."

It was unsure if this was a stunt, or a suicide mission. If the former, Peter Vallone, Jr. will use it as another reason his proposed no-stunt bill should be passed into law.

CityRoom is now reporting that the climber is an activist and is holding a banner that says: “Global warming kills more people than 9/11 every week.” It's likely that this has to do with World Environment Day, which is also what the Times Square pop up is for. He also is wearing a t-shirt plugging the website thesolutionissimple.org, and is believed to be Alain Robert -- who has scaled many buildings in his time, including the Empire State Building..

If anyone has any photos from scene, send them our way.

UPDATE: The NYPD's Emergency Service Unit has him in custody on the upper floor support beam.