Each year, leaders of the international business and finance community gather in the American Museum of Natural History for a black-tie gala hosted by the Brazilian-American Chamber of Commerce. In the Milstein Hall of Ocean Life, under the blue whale, the attendees honor two "persons of the year" — one Brazilian, one American — seen as best advancing the economic relationship between the two countries. Michael Bloomberg took home the honor last year. Next month, the Brazilian designation will be given to newly-elected far-right president Jair Bolsonaro.

The celebration of the ultra-nationalist leader, scheduled to take place on May 14th, has prompted outrage from New Yorkers and Brazilians alike. Advocates note Bolsonaro has openly embraced homophobia, misogyny, and racism, while frequently dehumanizing indigenous people as zoo animals or "chicken pox." Within hours of taking office, he had massively rolled back environmental protections in the Amazon rainforest, and has since undertaken an aggressive campaign of deforestation and mining that native groups have likened to the apocalypse.

There is a particularly bitter irony, the advocates say, that a man intent on destroying one of the world's most prized natural resources would be anointed Person of the Year inside a space dedicated to the celebration of the natural world.

"The fact that American Museum of Natural History would accept an event for something so counter to their own values, they should be ashamed themselves," Priscila Neri, a Brazilian activist with the NYC-based human rights organization WITNESS, told Gothamist. "In a moment when there's been a rise of authoritarianism around the world, they're giving a positive nod to a man who is rolling back human rights protections and scientific knowledge."

Reached for comment, a spokesperson for the AMNH told Gothamist that the gala was an outside event, and said that further questions would be answered by email. Those inquiries — including how much money the museum was being paid to host the ceremony — were not returned. 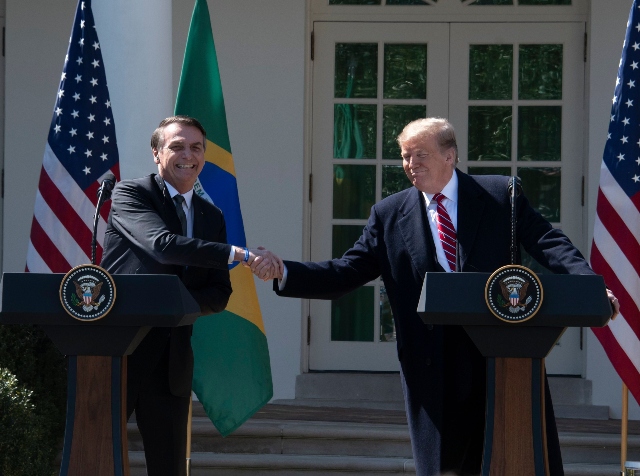 Representatives for the Brazilian-American Chamber of Commerce also did not respond to Gothamist's questions by press time, though a person who answered the phone for the organization confirmed that the American nominee had not yet been announced. It remains unclear whether Bolsonaro is planning to attend the event. He did visit the United States last month, privately meeting with President Trump, who has voiced his support for the Brazilian strongman. Earlier this week, Bolsonaro revealed that the two heads of state discussed a plan to jointly develop parts of the Amazon.

There is good reason to assume that at least some of the people organizing the Chamber of Commerce's annual gala — where $30,000 tickets sold out immediately — have business interests before the man they are honoring: The organization's president and board chairman, Alexander Bettamio, was reportedly one of Bolsonaro's choices to run Banco de Brasil SA, the state-run bank, and currently serves as the head of the Latin American division of Bank of America. The chamber's executive director is Ted Helms, a former investment manager at the Brazilian oil company Petrobras, which struck a $9 billion deal with Bolsonaro's government on Tuesday.

In Neri's view, the fact that the ostensibly non-partisan business group would present their annual award to Bolsonaro is "embarrassing and appalling," though not especially surprising: "That group exists to advance the economic interest of a tiny minority of rich people in Brazil and the United States, so, no, they don't care how his policies impact anyone else."

She added that it's "much more surprising that an institution so renowned and respected as the American Museum of Natural History would not see the bigger picture," noting that there is still time for the museum's leadership to "change its mind."

The gala comes at a time when New York City's cultural institutions are under increasing pressure to cut ties with controversial backers. Following several high-profile protests, the Guggenheim announced last month that they would no longer accept gifts from the Sackler family. Demonstrations outside the Whitney Museum calling for the resignation of the vice chairman, who owns a defense manufacturer supplying tear gas at the border, are now a weekly occurrence.

The AMNH has weathered its own share of controversial associations in the last few years. Most recently, the museum has faced protests for allowing Rebekah Mercer, heiress of the Breitbart-funding Mercer family, a seat on its board. Prior to that, billionaire oil magnate David Koch was forced out of his trustee position, after dozens of scientists signed a letter highlighting the philanthropist's climate change denialism.

As news of the Bolsonaro event spread among activists this week, the museum has once again found itself the target of condemnation. Ana Djordjevic, a Brooklyn resident and longtime NGO employee, who previously organized galas at AMNH, told Gothamist she sent the museum an email on Wednesday to register her dissent.

"I am writing to express disappointment that you would accept to host an event that honors someone with such harmful, hateful politics and policies that include the destruction of the natural world for profit and self-gain," she wrote. "I hope you can reconsider. And perhaps create some guidelines/policies for what kinds of events might be inappropriate for an institution such as yours to host."

As of this afternoon, the museum had not responded.

UPDATE 5:10 p.m.: In a statement, a spokesperson for AMNH, Roberto Lebron, told Gothamist: “This is an external, private event that does not in any way reflect the Museum’s position that there is an urgent need to conserve the Amazon Rainforest, which has such profound implications for biological diversity, indigenous communities, climate change, and the future health of our planet.”

The spokesperson could not immediately say whether the museum has guidelines in place for rejecting private events that conflict with the institution’s values.

Following publication of the article, a scientist at AMNH, who asked for anonymity in order to speak freely, told Gothamist that “all of the museum scientists are finding out about this [now]…it’s coming as a complete shock to us."

“No one thinks this is acceptable,” the employee added.

#american museum of natural history
#brazil
#Brazilian-American Chamber of Commerce
#jai bolsonaro
#museum
#original
Do you know the scoop? Comment below or Send us a Tip