What appears to be an orchestrated pattern of voter fraud is being reported at a pivotal precinct in South Williamsburg. According to a Board of Elections poll worker and another poll watcher, groups of young Hasidic men attempted to enter the polling station at IS 71 and vote under the names of other citizens who have yet to vote. "They're signing signatures, but the ID they show doesn't match the signature on the forms. Yes, there's been some illegal stuff going on," BOE poll worker Antoinette Reaves said.

An NYPD officer standing outside IS 71 told us he had witnessed four men attempting to vote under the wrong name in the two hours he had been posted there.

While some of the attempts were made by men who looked to be of voting age, others struck poll workers as obviously fraudulent. "They're fourteen, fifteen years old, walking in here with a crowd of people. We stopped them and asked for ID—we know they're too young to go in there. They've been trying it all day," Reaves said. "The same faces are appearing."

While Reaves could not say whether or not any of them have been successful, David Greenberg, a poll watcher for city council candidate Stephen Pierson, said the sheer number of attempts suggested that the problem was more widespread.

"I would definitely expect there are more, it's got to be closer to 20 or two dozen," Greenberg said. "[The BOE workers] are seeing a lot of fraudulent stuff, people are trying to sneak in, so they're aggravated as all hell."

Greenberg added, "There was a period of time when we weren't able to come in [to observe] because we didn't have the proper credentials, or so they said. I wouldn't question that there are more people trying this than we can see."

IS 71 is the same polling place where we found potentially illegal raffles that displayed campaign literature promoting preferred candidates, and promised voters a chance at a $250 cash prize or a gift certificate, so long as you cast a vote.

According to a member of the ultra-Orthodox community who claimed intimate knowledge of the faction's electioneering processes, the raffles serve a greater purpose than just enticing voters to cast ballots for their preferred candidates.

"Your name goes into a raffle if you put in that you voted. And they have access constantly to this data so they know who's voted from that," said the source, referring to leaders of Williamsburg's Satmar Ahronim sect. The raffle allegedly provides a list of names that cannot be used by fraudulent voters. At IS 71 earlier today, community members were seen picking up a stack of raffle cards every 20 minutes or so and scanning their barcodes.

The source, who declined to be named for fear of retribution, told us the fraud operation is run out of an ultra-Orthodox wedding hall at the intersection of Franklin Avenue and Flushing Avenue in Williamsburg. Volunteers are allegedly given free food and then "driven to four or five places" to vote under false names. "They have copies of the voter rolls, I don't know how they get them, but they get the names and the signatures," the source alleged.

Approached by a reporter this afternoon, a group of men inside the wedding hall denied any involvement with a voting fraud operation.

An Aaroni Satmar spokesman, Michael Tobman, emailed us this statement:

The Aaroni faction of Satmar Hasidim, in Williamsburg and in Boro Park, dispute any idea or accusation they engaged in inappropriate behavior around or attached to voting in yesterday’s Democratic Primary. Satmar is not a single community, but one of different civic priorities and concerns. Whatever may have been happening with some in Williamsburg’s larger Hasidic community had nothing to do with us. 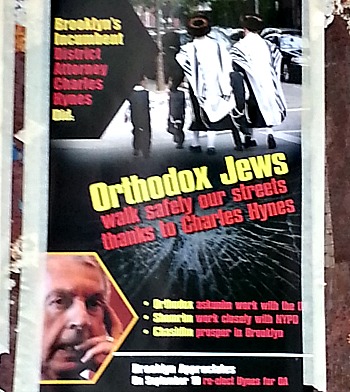 A spokesman for the Brooklyn DA's office confirmed that they haven't received any complaints of voter fraud referred from the BOE yet, and pointed out that the polls hadn't closed when we called. Long-serving Brooklyn DA Charles Hynes has faced an unusually stiff challenge for reelection this year, in part due to criticism that he's failed to aggressively prosecute sex-offenders in the ultra-Orthodox community.

An NYPD spokesman confirmed that additional officers were sent to IS 71 earlier this evening to control a "large voting crowd," but added that allegations of voting fraud weren't under the department's purview.

Moses, a 19-year-old Hasid who said he voted for Charles Hynes, said that while he didn't personally know anyone who committed voter fraud, he'd heard that it happens. "It gives us a bad name, it's not a nice thing," he said, adding that he didn't think people did it for money or prizes. "They're just doing it for the community. I just follow the community, I know they want my best, and I trust them."

Simon, a 24-year-old Hasid with a baby girl, expressed an even stronger bond with his community. "I don't know the meaning of democracy, I just vote what they tell me to do, because maybe they've made deals with the politicians," he told us. "If people voted more than once or voted for other people, I don't know if that happened, but it doesn't matter to me, because I know they're voting for the right people."

"Who's going to prosecute them?" asks our concerned source in the ultra-Orthodox community. "Morality is not the thing that guides them... Soon the government won't even be able to control them. They have their own judges, they have their own police, they do whatever they want."