A Times reporter makes his way down an empty street. His eyes dart first to the left, then to the right. All clear. He quickens his step, pulling his jacket around his face a little tighter. For the first time, he's grateful for the icy winter air—it gives him a reason to walk with haste. It gives him a reason to keep his eyes to ground.

He rounds the corner of Eighth Avenue. There before him, standing outside of Dom's Chicken & Liquor, are two cops, leaning against a patrol car, which is parked in a bike lane. The reporter feels his chest tighten, and his palms dampen beneath his gloves. "Is the backpack closed?" He was certain it was—he'd checked it four times before leaving The House. He looks at the cops. They are laughing, pointing at a piece of chicken on the ground. They seem unaware of his approach, even as his once confident gait begins to lose form, his stride suddenly as halting and uncertain as a newborn foal's. The police didn't seem to notice this, though, for this reporter is a white man. A white Times man.

You see, what Jim Dwyer was carrying wasn't a vile of smack or bouquet of bonsai kittens. It was a "modest stash of pot," purchased via a friend who "knew someone in that world." The Marijuana World. The Mariworldna World. The Mariworlna Whirl. Jim had long imagined that world differently—a casual tete-a-tete with a long haired man in a bathrobe. It wasn't like that. The business of buying pot—even modest amounts—requires the finesse of a seasoned politician or a drug-seeking jungle cat. "...After an introduction, then a quiet, discreet meeting, I was on my way to the subway. Never before had I walked through Midtown Manhattan with it on my person," Dwyer writes. His rare and precious cargo contained "edibles" (A Technical Term) and "a few pinches of what was described as 'herb.'" Herb. Let's say it together. Heeeerrrrbbb. See the way it rolls from your tongue?

Dwyer, a professional reporter, didn't think to check how much weed he was carrying—he couldn't see the scale "but it didn’t feel too heavy." But he did discover something more interesting— that as a white man, he could have been carrying not only a "pinch of heeeerrrbb" but a four-foot-tall statuette of St. Ann made entirely of black tar heroin, and the police would have been none the wiser.

Thanks to the city's endlessly controversial stop-and-frisk tactics, the vast majority of people busted for weed possession are black and Latino men. It's not because they're more likely to use it—surveys, in fact, show the opposite—but because that demographic comprises the bulk of people asked to empty their pockets by cops. Furthermore, a report released yesterday by the state Attorney General [PDF] finds that "white defendants charged with misdemeanor marijuana possession after a stop are nearly 50% more likely than blacks to receive an Adjournment in Contemplation of Dismissal (ACD), and thereby avoid a conviction." Similar disparities are present in Hispanic defendants, as compared to white defendants. 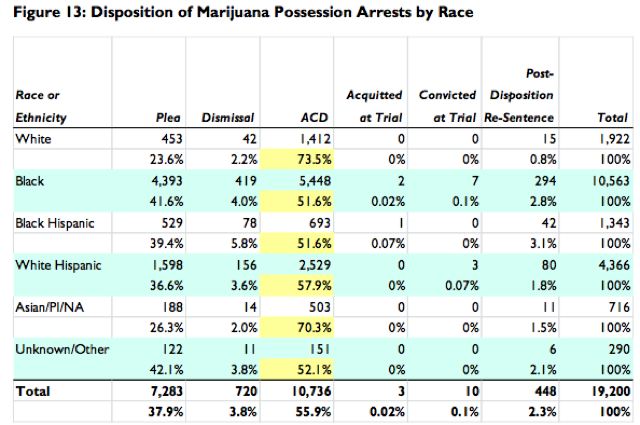 Via Office of the Attorney General

But let's get back to what matters here. What happened to Dwyer? Did he lose his steely nerve and fall prey to the unyielding, chicken-covered hand of the law? Did he smoke the "herb" (Technical Term), or is he still slumped in the shadows of a 4th floor Times broom closet, hoping an intern will teach him to roll a joint? None of the above, he claims. "The pot got to a couple of people who might need it to get through some medical storms." People unwilling to walk where Dwyer has walked, to know the fear that he has known. What will he do now? Find out in next week's issue, "Xanax Santa: One Man's Journey to the Times Holiday Party."

#marijuana
#new york times
#pot
#pot bust
#weed
Do you know the scoop? Comment below or Send us a Tip