Brave Nanny Explains How She Saved Tot in Mumbai 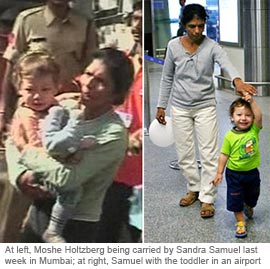 The Indian nanny who saved the toddler of a Brooklyn couple in Mumbai gives her first interview to the Daily News. During last week's terror attacks, Sandra Samuel says that little Moshe Holtzberg, just shy of his second birthday, was covered in blood and next to his mother's body when she found him.

The child's parents, Rabbi Gavriel and Rivka Holtzberg, ran the Chabad-Lubavitch Center, which was seized by terrorists on November 26. Samuel, who usually had Wednesdays off, had decided to stay work that day and ended up hiding out in the service kitchen for hours when the terrorists took over.

"Baby was standing next to his Ima [mother], who was laying on her side. His Aba, Rabbi, was laying next to her, on his stomach. Their eyes were closed, unconscious.

"Next to them, I saw the legs of a man out from under the table, with blood. Baby's pants also had a big circle of blood.

"The terrorists must have been upstairs. I grabbed the baby and I ran, then I got Zaki, and we ran out."

Moshe's parents were found dead after Indian commandoes regained control of the Chabad House. Samuel says that after rescuing the child, she told the police to check on the other hostages, but they ignored her. Now she regrets not doing more, "I should have gone in again. I should have tried to help them. I should have checked to see what's wrong. What kind of a person am I to have just run out?"