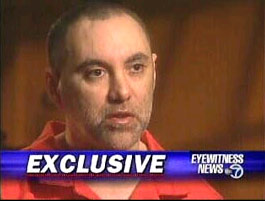 Peter Braunstein, the journalist who disguised himself as a firefighter and then sexually assaulted a colleague while holding her captive for 12 hours, gives his first post-conviction, post-sentencing interview to WABC 7's Bill Ritter for Friday night's 20/20. WABC 7 offered this excerpt, which seems to have Braunstein explaining that he didn't intend to do anything criminal:

A jury found Braunstein guilty of 14 of 15 charges of assault, sexual abuse, kidnapping, burglary and robbery (they acquitted him of arson) and a judge sentenced Braunstein to 18 years to life.