The 28-year-old man who was fatally shot by a probationary NYPD officer in a housing project hallway last night was "a total innocent," NYPD Commissioner Bratton told reporters at a press conference today. Victim Akai Gurley had entered a dark stairwell with his girlfriend at the Pink Houses in East New York shortly after 11 p.m., just as Officer Peter Liang and his partner were proceeding down from the landing one flight up. No words were exchanged, but Officer Liang, whose gun was drawn, fired one round, hitting Gurley in the chest.

Bratton described the incident as an "unfortunate accident" caused by "an accidental discharge." Liang and his fellow officer are both rookie cops conducting a "vertical patrol" through the project, where a shooting occurred on Saturday. (Bratton said there have been two homicides at the Pink Houses so far this year, as well as two robberies and four assaults in recent months.) Both officers were assigned to the patrol as part of "a violence reduction overtime detail" for Operation Impact, which brings additional officers into neighborhoods that have seen an uptick in violence.

Liang and his partner were working their way down from the eighth floor when they encountered Gurley, who had been in an apartment getting his hair braided in the hours preceding the shooting. His girlfriend, Melissa Butler, said they decided to take the stairs because the elevator was taking too long.

Butler says police said nothing before shooting Gurley. "He was just standing there and they shot him," she tells the Daily News. "He was an innocent man. They didn't give no explanation. They didn't identify themselves. They just started shooting." Her mother tells the Post, "He’s a nice man. He’s been together with my daughter for four years. He has one daughter, as far as I know." 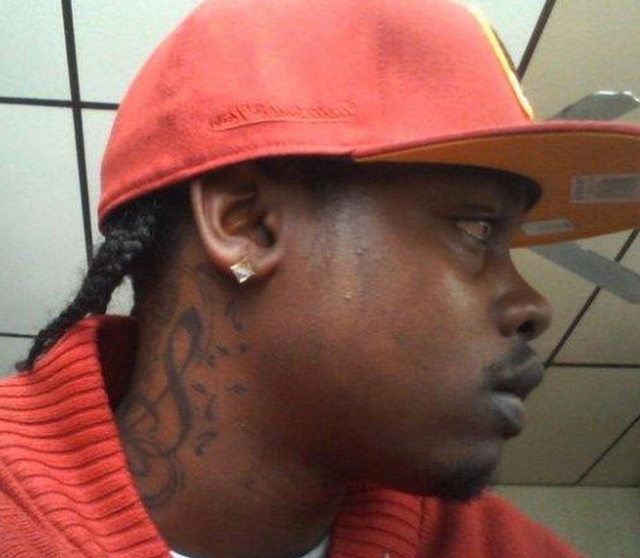 Akai Gurley, in a photograph that was posted to his profile on ExploreTalent, a casting website for actors and models. (Via NY Times)

Gurley and Butler ran down the stairwell to the fifth floor, where Gurley collapsed. 911 was called and Gurley was rushed to Brookdale Hospital, where he was pronounced DOA. According to Butler, the officers never came down to check on Gurley, and 911 was only called after she banged on a neighbor's door. Commissioner Bratton says Liang and his partner did go down to aid Gurley.

Bratton says it appears that Officer Liang did not intend to fire his gun, and that it's up to officers' discretion when they draw their firearms. "As in all cases, the officer would have to justify the circumstances that caused him to unholster his firearm," Bratton said. Though the stairway was dark, Liang did have a flashlight in one hand.

One resident told the Post that the lights in that part of the stairwell had been out for at least three weeks, and that “with that door closed, you can’t even see in the staircase.” In July, Mayor de Blasio announced that the city was allocating $210.5 million to improve safety in public housing developments, with $50 million for physical improvements to enhance security. Today a repairman was seen fixing the lights in the stairwell where Gurley was killed.

Officer Liang, who has been on the job about a year and a half, has been placed on modified duty pending the outcome of an Internal Affairs investigation.

Charles Barron, a former Councilman who was recently elected to the State Assembly, visited the Pink Houses this morning and said, "This is madness. It must stop. There are problems all over the country with law enforcement and the people we pay to protect us in the black community. Our lives are just as valuable as anyone else’s. This young man should still be alive. I want to hear the justification for this one. We’re going to fight for justice with this one just like they are in Ferguson."

At an unrelated press conference, Mayor de Blasio told reporters, "We don’t know enough yet, but it does appear to be an accident. This is a tragedy." And Brooklyn DA Ken Thompson issued a statement saying, "The fatal shooting of this unarmed man is deeply troubling and warrants an immediate, fair and thorough investigation. Many questions must be answered, including whether, as reported, the lights in the hallway were out for a number of days, and how this tragedy actually occurred."

#brooklyn
#east new york
#original
Do you know the scoop? Comment below or Send us a Tip