Bratton Swears He Knows He's Not The Mayor This Time

Bill de Blasio's choice of police commissioner, Bill Bratton, was publicly known well before the two strode into a cramped room at the Red Hook Community Justice Center around 11 a.m. Less clear, though, was why de Blasio, hailed as a progressive visionary and outspoken stop-and-frisk detractor, selected a man who, in the eyes of many, shaped the culture of the NYPD into what it is today.

Bratton served as police commissioner under Mayor Rudy Giuliani between 1994 and 1996, his short tenure attributed to his perhaps overly aggressive perception of what his role entailed, despite reducing crime by 39 percent and pioneering such enduring innovations as CompStat. Despite his on-paper successes, Bratton acknowledged that he made some mistakes, but he's learned a thing or two in the subsequent 20 years.

"'How do I know you're not going to end up with me the same way you ended up with [Giuliani]?' Bratton recalled former mayor of Los Angeles James Hahn asking him in 2002. "And I said to him, 'I learned.'"

"With all due respect to Mayor Giuliani, we had our differences, but some of those differences were created by me, in hindsight," he said, adding that he was confident his reviews from his former employers in Los Angeles—Mayors Hahn and Antonio Villaraigosa—were favorable.

"I think they assured [de Blasio] that the relationship with me, working for them, was one of collegiality, collaboration and also recognizing that I report to the mayor. I’m not the mayor." 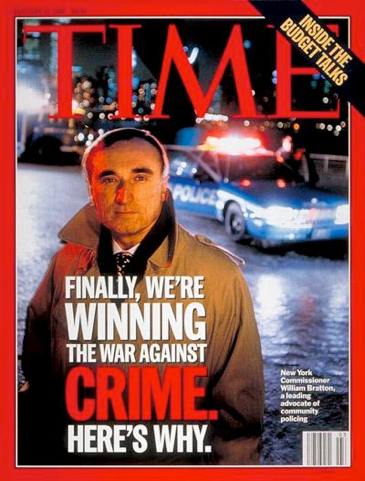 On the issue of stop-and-frisk, de Blasio emphasized the importance of not comparing New York to the gang-riddled streets of Los Angeles, where he argued it's possible to employ the tactic effectively and within the bounds of the Constitution. But he adhered to his long-standing message that stop-and-frisk, as it was employed under Kelly, is dead.

He also noted that New York is a very different place now than it was when Bratton was last in charge.

"I imagine that many of us in this room have become stronger, wiser, better over 20 years. And I think, from my vantage point, that Commissioner Bratton has gotten better every year," he said. "And what he did in L.A., as I said, was arguably the toughest mission anywhere in the country, in terms of bringing police and the community back together, and he did it."

De Blasio has proven his ability to focus his platforms to a single theme—it was, after all, the 'tale of two cities' trope that got him elected. His message today was clear: Crime must be tackled by the police and the community, working not against each other, but in tandem.

"I think it’s our sacred mission is to ensure that we achieve safety and respect for individual rights simultaneously," he said.

The process for selecting Bratton was difficult, de Blasio said, having weighed him against current Chief Philip Banks III and First Deputy Commissioner Rafael Pineiro. Despite being "deeply impressed" by all three, de Blasio said the more people who spoke positively of Bratton, the more clear the choice became.