While repeatedly calling the death of a Staten Island man during an NYPD arrest a "tragedy," NYPD Police Commissioner William Bratton said he was ordering "top to bottom review of all of the training this department provides to its personnel... I would anticipate that coming out of this effort that there will be a retraining of every member in our city Police Department in the weeks, months and potential years ahead"

The commissioner explained they'd "specifically [focus] on force, how do we train our officers for a takedown, how do we train them to use the various levels of force that they're authorized to use." 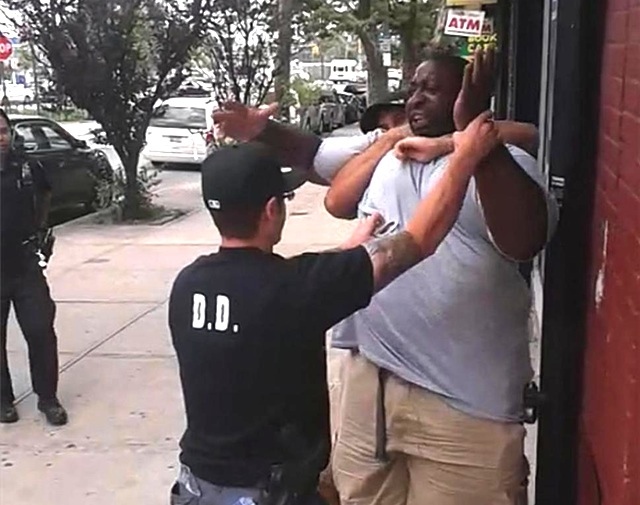 Eric Garner, 43, died while police officers tried to arrest him (cops claim he was selling untaxed cigarettes while witnesses say he was just breaking up a fight), and a shocking video shows Garner arguing with the police: "I was just minding my own business. Every time you see me you want to mess with me. I’m tired of it. It stops today!" When a number of cops try to subdue him, Garner, who weighed 400 pounds, is seen swatting their hands away and saying, "Don’t touch me, please."

As Officer Daniel Pantaleo puts him in a chokehold, other officers struggle to pull him to the ground and get his arms behind his back. Garner, an asthmatic, can be heard repeatedly saying, "I can't breathe." He was later pronounced dead at Richmond University Medical Center, and the first police report didn't even mention the chokehold. Pantaleo, who has been sued twice for civil rights violations, was stripped of his badge and gun while Officer Justin Damico was placed on modified duty.

Chokeholds have been prohibited by the NYPD since 1993. In 1994, during Bratton's first stint as NYPD Commissioner, widespread outrage was sparked after a Bronx man named Anthony Baez died after being put in a chokehold by an NYPD officer. So far, the NYC Medical Examiner has not announced Garner's cause of death.

Bratton said, "The department really does need to do a lot more, a lot more, in the area of training," and added that he expected the Eastern District U.S. Attorney to review the death and for the U.S. Department of Justice to file a civil rights lawsuit.

Further, Bratton noted that he was sending a team of senior police officials to Los Angeles to observe the LAPD, which underwent retraining after numerous police brutality incidents. Bratton told reporters, "The Los Angeles Police Department, which I led for seven years, 2002 to 2009, went through a phenomenal review of its use of force policies under the monitor of a federal monitor...so that in many instances, they have the most contemporary policies on use of force."

Bratton said, "The department really does need to do a lot more, a lot more, in the area of training." He emphasized that besides checking in on the Staten Island commands, to see how police officers there are doing (he was there this morning), Bratton said he met with local civic and church leaders to discuss what they think they need. Also, he's going to convene with police unions, to keep them up-to-date on his plans for the department.

Patrick Lynch, head of the Patrolmen's Benevolent Association, told the Wall Street Journal that the union welcomed retraining, saying, "What we really need training for is what we aren't allowed to do and what will get us in trouble... We need training in how to deal with someone who won't comply."

The commissioner dismissed the possibility that the chokehold was prompted by Garner's race, and responded to a question from the Observer, "I personally don’t think that race was a factor in the incident involved in this tragic death." However, black politicians disagreed; City Councilwoman Inez Barron said at a rally, "“It doesn’t happen to white folks. It happens to black folks."

Bratton said, "By reviewing our training we seek to make sure our practices & policies build public trust & confidence. This tragedy also presents an opportunity to go forward & develop training to build community confidence and support."

A funeral for Garner will be held today in Brooklyn.