At a City Council hearing yesterday, NYPD Commissioner Bill Bratton said he opposes all nine proposed police reform bills on the table, including two councilmembers are calling the Right to Know Act. The legislation would ban chokeholds, expand the definition of "use of force," and require NYPD officers to identify themselves and provide a business card in certain circumstances.

Bratton told the members of the Council's Public Safety Committee that the legislation represented "unprecedented intrusions" on his power.

"These are the purview of the police department, not legislative control," Bratton said.

For proof that the skeptical pols in attendance should trust him, he cited the retraining rolled out following the death of Eric Garner, a statistical decline in reported use of force by officers, and a (dubious) decline in Civilian Complaint Review Board complaints since 2010.

In a testy exchange, Queens Councilman Rory Lancman reminded the NYPD reps on hand, "I ask the questions," then pressed them on how it's possible that the department's internal ban on chokehold use has been effective, given that it was created in 1993 and complaints about the tactic persist. Ceding the point, Bratton said that the current ban is not a total ban.

"We evaluate all uses of force, including chokeholds...and while there is a general prohibition [on chokeholds], we take into account what the officer was facing at the time," Bratton said, adding that if "an intentional violation" of department policy was discovered, "that would be taken into account."

The department's Deputy Commissioner of Legal Matters Larry Byrne said no city or state has made a law banning police chokeholds, so this would be uncharted legal territory, and argued that existing New York state laws are adequate to address brutality. Bratton emphasized that Bill de Blasio has his back in opposing the legal ban.

Eric Garner's mother Gwen Carr would later testify that none of the officers involved in killing her son have so much as lost wages in the 11 months since, much less faced criminal charges.

Bratton said that he agreed with the principles behind each bill, but argued that they are "redundant" because the department is addressing the longstanding distrust of cops in communities of color on its own.

Referring to demands for more public data, Bratton called his department a "model of transparency," which is hard to reconcile with its notoriety for ignoring, delaying, and fighting public records requests, and the lethargy and outright hostility its press office often displays towards reporters.

Bratton also warned that new police reforms would "stir the pot" among rank-and-file cops just getting used to the changes of the Community Safety Act and a judge declaring the NYPD's use of stop-and-frisk unconstitutional. 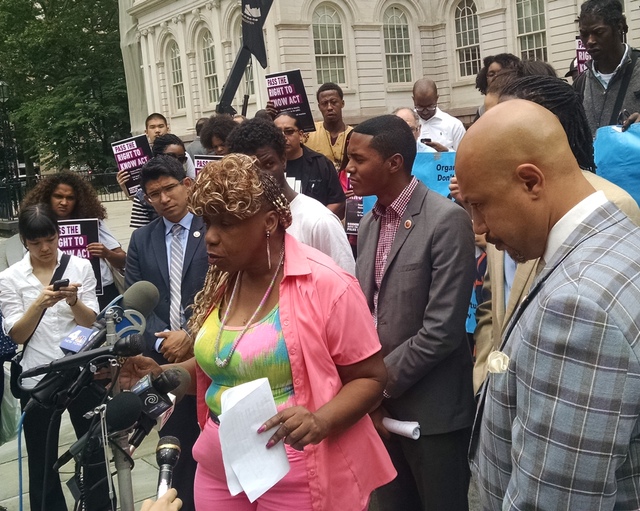 "We need trust," Eric Garner's mother Gwen Carr said outside of City Hall. "If they're going to take our tax dollars, we need something for it."

Following a rally on the City Hall steps, Bronx Councilman Ritchie Torres, sponsor of legislation to require officers to inform people of their right to refuse searches that have no legal basis, said he was surprised to hear Bratton say that he agreed with the lawmakers' goals, because in closed-door negotiations he had "ferociously opposed" them. Torres said it helped that much of what was being discussed was recently recommended by President Obama's Task Force on 21st Century Policing, but he bemoaned the hand-wringing over what message the reforms would send to cops.

"The NYPD, the leadership in particular, has this sense that, 'We're special. We're above the oversight,'" Torres said. "When we're going to amend the building code, no one asks, 'Well, what affect is this going to have on the morale of building inspectors?'"

Many advocates and pols pushing the bills questioned whether the recent commitment to hire 1,300 more police officers and put several hundred more on the streets from desk duty would really result in better community relations given that the driving strategy of Bratton's administration is aggressive enforcement of low-level offenses, concentrated in black and Latino neighborhoods.

Bratton had opened his remarks by thanking the Council for signing off on the increased NYPD headcount. The additional hires was strongly opposed by police-reform activists, but Speaker Melissa Mark-Vivierito championed it, and Mayor de Blasio gave in to the demand, in the end approving 300 more officers than initially proposed.

Keeshan Harley, a 20-year-old, African American Bedford-Stuyvesant resident and organizer for Make the Road New York, estimates he has been stopped and frisked 100 times in his life, starting when he was 13. He said that even as recorded stop-and-frisks have dropped off a statistical cliff citywide since 2011, he consistently has some sort of police interaction every day, be it officers asking him his name and where he's going, or putting him up against a wall and going through his pockets.

Harley said that the one time he was arrested, at 16, was because an officer found a small amount of marijuana on his friend and decided he was responsible as the eldest in the group. Recently, he said, undercover officers jumped out of an unmarked car as he was walking down the sidewalk at night, laughed when he asked for their names and badge numbers, and searched his pockets even though he refused consent.

Harley says that the existing mechanisms for addressing police misbehavior make it too hard for everyday people to get justice.

"I'm just trying to go about my business. If I stopped what I was doing every [bad police interaction], I wouldn't be able to have a very productive day," he said.

The nine proposed laws are as follows:

Intro. 182-A: Would mandate that officers identify themselves by name and explain the reason for stopping someone. If an interaction didn't end in arrest, officers would be required to give a business card including contact information for the Civilian Complaint Review Board. (Bratton said he opposed "imposing legislation on police protocol on the operational level.")

Intro. 538: Would require cops to only use the amount of force necessary to protect themselves from harm or death.

Intro. 539: Would broaden the definition of "use of force" to include drawing a gun, firing a gun, grabbing someone by the neck or hitting him in the head, Tasing or Macing someone, or doing anything that puts someone in the hospital or kills her. "Use of force incidents" require cops to compile data for public reports, and the bill would also expand the types of data collected to include disciplinary outcomes for the officers involved.

Intro. 540-A: Would make a police chokehold a misdemeanor punishable by as much as a year in prison and a $2,500 fine.

Intro. 541: Originally proposed as part of the Community Safety Act, it would require officers to get recorded or signed consent before searching someone or their home or car when performing a search without a warrant or probable cause. The NYPD would then be required to issue quarterly reports on searches performed without a clear legal basis.

Intro. 606-A: Would require reporting of uses of force in the course of Broken Windows enforcement, for crimes such as graffiti or public urination.

Intro. 607: Would create a task force to come up with a police body camera policy.

Intro. 824: Would require the NYPD to publish the general location of the 200 officers with the most CCRB complaints, and require the department to report the division of the 500 officers named in the most police-brutality lawsuits.