Bratton: Broken Windows Is Broken, But Trust Me To Fix It

Late this morning at the Police Academy in Flushing, NYPD Commissioner Bill Bratton assembled the department's executive officers, City Hall's politicians and press corps, and representatives of district attorneys' offices from each of the five boroughs to sell the idea of trusting him to tweak Broken Windows policing. In support, he offered carefully tailored stats (PDF) and the prediction that failing to trust him on this one will plunge the city into nightmarish disorder unseen since the Bad Old Days.

The bottom line was clear: Bratton doesn't want to let Council Speaker Melissa Mark-Viverito decriminalize several of the most commonly enforced low-level offenses. Bratton maintains that taking away cops' ability to run people's IDs and check for arrest warrants would send the city tumbling "back to the '70s and '80s." He repeatedly pointed to a New York Post cover story about a sidewalk cycling stop that led to the discovery of a stolen gun. (That particular arrest also got a glowing write-up from the NYPD's in-house propaganda department.)

Still, Bratton said he has "common ground" with critics of Broken Windows policing who are upset that it disproportionately affects young men of color

"The process has been failing and failing dramatically," he said of misdemeanor arrests and criminal summonses. "The subject of a lot of concern at this time is that process. Nobody's happy with it."

Indeed. In response to today's presentation, the NYCLU's director Donna Lieberman issued a statement, saying, "The stubborn commitment to Broken Windows policing that has become code for racial profiling and a source of resentment and distrust cannot be ignored or condoned, particularly in the context of the lowest crime levels in decades and in a city where police-community relations have been so badly damaged by the Giuliani-Bloomberg era.” 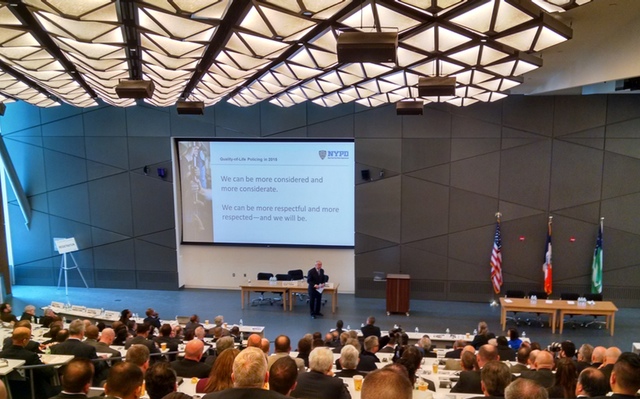 What Bratton is willing to change is unclear, but the statistics he used to buttress his argument also cut against it. The short version is that major crime is down in New York since the mid-2000s, as are criminal summonses, civilian complaints, and the city's and state's prison population. Crime continues to fall, and, despite Bratton's tough-on-showtime-dancers stance, fewer summonses are being issued for the behaviors at issue—public drinking, public urination, park rules violations, marijuana possession, and littering. So what's the problem with decreasing the penalties, treating those offenses like a traffic ticket?

Bratton and Deputy Inspector Thomas Taffe, who shared pitchman duties today, said that thefts and violent crimes make up the bulk of misdemeanor arrests—those are up, by the way—and that keeping people out of the criminal justice system and out of jail for quality-of-life offenses is a good thing. But they argued that the discretion to stop people for petty violations and demand ID is one cops need to keep.

"We cannot take that critical tool away from our officers," Bratton said. "We can improve on how they use their discretion, and we're committed that.

Here is where things get a little Twilight Zone. During the presentation, Taffe touted the fact that only 29 percent of misdemeanor arrests resulted in the subject being found guilty in 2013. For summonses, that figure was more like one in five during the last decade, according to a just-released John Jay College report (PDF). For either category, most cases end with either the case being tossed or the defendant accepting an adjournment contemplating dismissal, a deal with prosecutors to drop the charge so long as he stays out of trouble for a certain time period. It's easy to read this as an indication that most low-level charges are bogus, or at least don't have the full confidence of prosecutors. However, Taffe argued that getting people entangled with the legal system with an ACD actually works to keep them out of trouble.

"Just because they walked out of court doesn't mean it's a dismissal," he said. "The judge that's contemplating the dismissal is actually waiting for him or her to commit another crime."

Unaddressed was the fact, raised by the John Jay report, that consistently a third of summonses turn into arrest warrants for otherwise law-abiding people who miss their court dates or fail to pay their fines. Those people end up living with a criminal record. This is the main argument against the practice, which many see as stop-and-frisk reincarnated.

"Stop, Question & Frisk and Quality of Life are like apples and oranges," says Police Commish. He points out that w. QOL a crime was seen.

But his reasoning for what he called "doubling down on" Broken Windows is strikingly similar to the rhetoric around ending stop-and-frisk, which he mocked.

"There was too much of [stop-and-frisk]," he said. "The posture of the administration back then was that if they stopped [stop-and-frisk], the city was going to go to hell in a hand-basket."

That didn't happen. And the near-total stoppage of low-level enforcement during the police work slowdown this winter did not send squeegee men rushing out from under the Chelsea Piers. So when will Bratton stop using fear to sell his tactics?

#Bill Bratton
#broken windows
#Police Academy
#original
Do you know the scoop? Comment below or Send us a Tip