NYPD Commissioner Bill Bratton believes that "so-called rap artists...are basically thugs," that Black Lives Matter protests are "anti-societal initiatives" of which the murders of police officers are a "direct spinoff," that women should "adopt a buddy system" to protect themselves from rape, that filming the police constitutes "an epidemic," and that marijuana should remain illegal because it is the source of the "vast majority" of violence in New York City. Mayor Bill de Blasio won't, and perhaps feels he can't, stop the torrent of opinions antithetical to his mayoral campaign flowing in Boston-accented monotone from his employee's mouth. Over the weekend, Bratton added to his catalog of incendiary statements in his preferred interview environment, AM talk radio, by playing expert on the history of the civil rights movement and advising Black Lives Matter protesters to pack up their signs and go home.

Versus in this city, New York City, for example the NAACP has been sponsoring meetings at schools and other locations where people in fact can engage in dialogue. They’re encouraging their members to attend police precinct community councils, where they can express their concerns and do it in a way in which their voices can be heard, do it in a way in which they can be seen, and also would allow the police and other criminal justice officials, district attorneys, etc., to also be seen and be heard.

And until we do that, we can then just stand on these picket lines at these marches and demonstrations and scream and holler and accomplish nothing. It makes for good TV, but it doesn’t make for good consensus building or good resolution of the issues of the day.

This diatribe is tricky because, though Bratton claims to be upset about the content of Black Lives Matter protesters' message—what he believes are narrowly focused, unfair generalizations about police being racist and brutal—his prescription is format-based. In other words, he claims to want more conversation, but he doesn't want that conversation happening in public.

The thing is, Black Lives Matter—like the civil rights movement, the labor movement, Occupy Wall Street and any other social movement that has had some impact in the last century—relies of a multitude of tactics, of which mass "good for TV" protest is a central but by no means defining piece.

There are camera-ready slogans such as this: 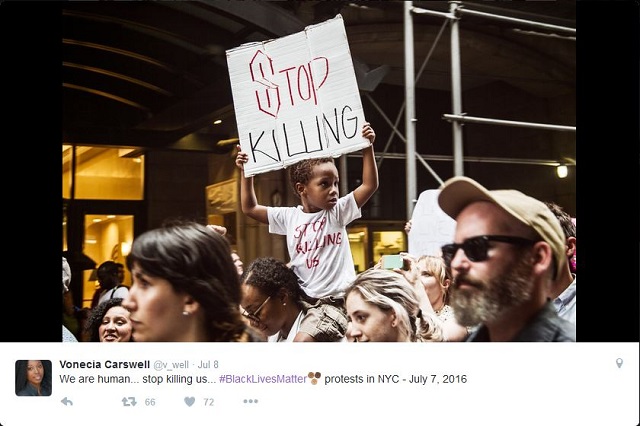 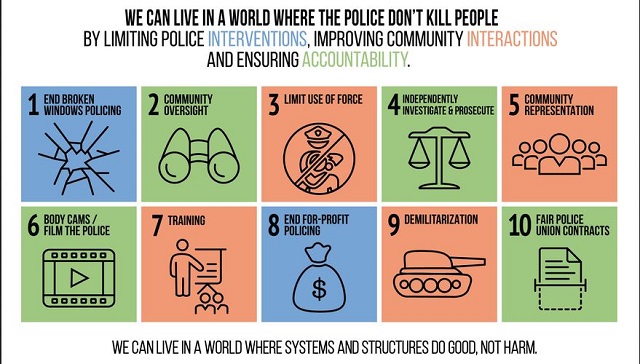 The Campaign Zero platform is worth keeping in mind when Bratton says, as he did in this interview, "Literally everything that's being suggested that police need to do to start bridging the gap, we have been doing for the last several years in New York City." He cited only training, technology, and an amorphous community policing program. Elsewhere in the interview, he calls Rudolph Giuliani "the mayor," and Cosby asks him about the police shooting of an allegedly armed man on Saturday, but not about the revelation that the unarmed man shot dead by an off-duty officer last week seemed not to have attacked the officer as some had claimed.

Not parenthetically, the latter police shooting is being investigated by Attorney General Eric Schneiderman rather than the local district attorney's office due to a directive issued by Governor Andrew Cuomo last year. Such an order would be hard to imagine in the absence of a concerted campaign for police accountability.

Under the Black Lives Matter umbrella, there are also economic boycotts, activist-backed candidates running for public office, advocates meeting with the Obama administration and presidential candidates, and yes, people attending community council meetings. The merits of each approach is up for debate, but the movement would not be at the center of the public conversation were it not for people "standing on these picket lines at these marches and demonstrations and screaming and hollering and accomplishing nothing." It's what accounts for the difference in volume between Black Lives Matter and, for example, the movement for tort reform.

Similarly, Bratton is right that the civil rights movement was not one easily caricatured phenomenon, but it was also far from popular in the U.S. at the time, among white Southerners, but also among national law enforcement, white liberals, and depending on the particular campaign, certain activists. And, importantly, demonstrations that drew national media attention were the gasoline powering the movement. Legal maneuvering brought about the Supreme Court decision in Brown v. Board of Education, but the decision would be meaningless to many were it not for the steps of those brave enough to actually try to attend white schools in the face of white mobs and indifferent or actively hateful police. There were the sit-ins, seeking to desegregate public accommodations and businesses, and the Freedom Rides, seeking to desegregate bus travel in the South. All of this was illegal until the federal government was embarrassed into deciding otherwise.

There were boycotts, voting drives, and traffic-blocking, often un-permitted marches. All were effective in disparate ways, but the demonstrations would not have made national headlines had they not been met with violence by white mobs and police. For organizers including Martin Luther King, there was great tension between setting the stage for TV-ready beatings and protecting vulnerable African-American locals, who would have to live with the white power structure long after the camera crews had moved on.

The demonstrations of the civil rights movement carried on over the objections of many in power, including liberals like Robert and John F. Kennedy. Robert Kennedy called for a "cooling-off" period following violence against the Freedom Riders, to which activist James Farmer replied, "We've been cooling off for 350 years." FBI director J. Edgar Hoover famously called King "the most notorious liar in the country" after King noted that FBI agents in the South seemed to not be doing much to stop white supremacists and local police. Around the same time, Hoover tried to place stories about King's extramarital affairs with reporters, and one of Hoover's deputies wrote an anonymous poison pen letter to King outlining knowledge of the affairs, calling him "evil," and "a colossal fraud," and trying to convince him to kill himself.

Members of the white power structure who had grown tired of dealing with the nonviolent civil disobedience of King's Southern Christian Leadership Conference, the Congress on Racial Equality, and the Student Non-Violent Coordinating Committee had only to look to the separatist rhetoric of the Nation of Islam, the Communist whisperings in some corners of the civil rights movement, and later, the Black Panthers, the Weather Underground, and the riots that followed the assassinations of King and others to see how good they'd had it.

For the full audio of Bratton's interview, listen here: