Brandon Jacobs Visits Adorable Kid Who Sent Him $3.36 To Stay With Giants

Following six seasons and two Super Bowl victories, running back Brandon Jacobs parted ways with the Giants and signed with the San Francisco 49ers. But one adorable six-year-old did everything he could to get Jacobs to stay, including sending him the contents of his piggybank: $3.36. Jacobs was so moved by the letter from six-year-old Joe Armento, he decided to visit him while in NJ this week, to play in a bouncy house and pay him back for his contribution. "Lil Joe has made my heart grow," Jacobs tweeted.

Jacobs brought his five-year-old son, Brayden, to meet Joe and his four-year-old brother Nick, and all four played together in a bouncy house for nearly two hours. "He told me he really wanted to get out there with the kids," mother Julie Armento told The Sacramento Bee. "He really wanted to enjoy it, and he did. It was amazing." Jacobs told them he had a great time: "It was just us in the whole place and we were just going room to room - just bouncing and flipping all over the place, hitting each other with balls, sweating, our shirts filthy. We were just dirty, stinky boys, you know?" 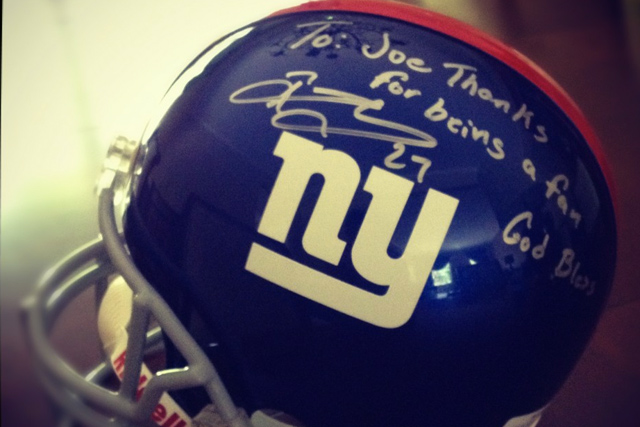 Jacobs gave Joe a signed Giants football helmet with his former number, No. 27., reading: "To Joe: Thanks for being a fan. God bless, Brandon Jacobs." You can see that above. He topped it all off by also giving him $5 to pay him back for his monetary contribution: "He had some interest in there just for being a good kid. He's worth a lot more than that $5 bill I gave him."

Jacobs explained why Joe's letter moved him so much: "I'm at a point in my career when people have stopped believing in me and not believing that I can still play. But that's not the case. Joe believes in me, gave me a lot of confidence and a lot of want-to. And I'm ready to go. I can't wait until the season starts."