Brain Dead Baby's Father Claims It Was an Accident 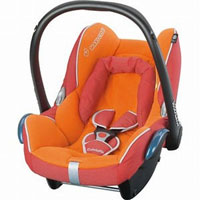 Jose Fernandez supported the mother of his now-brain dead son as she was arraigned for attempted murder, assault and endangering the welfare of a child. Fernandez said that whatever happened to their son 7-week-old Pablo must have been an accident.

Kiana Paez brought their son to Elmhurst Hospital Thursday, where doctors notified police after finding several broken bones and head trauma that left the infant brain dead. A recovering drug addict, Paez later admitted she had dropped him on his head and smacked him in the face, which probably caused the baby's cut lip. Doctors also noticed many of Pablo's ribs had been broken weeks earlier along with a broken leg; since medical treatment had never been sought, the infant probably lived most of his short life in constant and excruciating pain.

Fernandez had little explanation for how Pablo could have suffered the previous injuries. He did say Paez told him the baby was choking and she was trying to help him but accidentally dropped him on his head. He described to the press through an interpreter that "[Paez] has a good heart" and he was "100% sure she wouldn't do that." Pablo will likely be declared dead tomorrow and the charges against Paez will be raised to murder.