By mid-January, the first of New York City’s free public Wi-Fi stations will be available for use along 3rd and 8th Avenues in Manhattan. By July, there will be 510 of the LinkNYC kiosks—“Links,” for short—bringing gigabit-speed Wi-Fi, free telephone calls, and cellphone charging portals to the husks of old payphone booths across five boroughs. But how fast will this internet actually be? Who will be able to use it? And what’s the catch?

IS THIS FREE INTERNET GOING TO BE FASTER THAN THE SLOW STUFF THAT ALREADY EXISTS IN SOME PARKS AND SUBWAY STATIONS?

“This is going to be the fastest internet connection you’ve ever used,” Colin O’Donnell, the chief operating officer of Intersection, one of the groups overseeing LinkNYC, told reporters yesterday. Gigabit speeds means Links will be up to 100 times faster than anything that’s publicly available. According to O’Donnell, uploading a bunch of photographs would take two minutes, not two-and-a-half hours, like it might with your cable provider with only 5 mbps of upload speed.

“If you want to download a movie off of iTunes or Google Play and save it offline, you can do that in a couple seconds on a Link, whereas on a home network it’s gonna take you several minutes."

The actual speed of the kiosks remains to be seen. But according to the City, there will be 4,550 Links in New York City within four years, “and every one of them in Brooklyn, the Bronx, and Queens will have gigabit speed.” Over the course of 12 years, the City will install at least 7,500 Links, but it’s not yet clear how many of those will feature gigabit speeds.

IS THERE A DATA CAP FOR HOW MUCH CRAP I CAN DOWNLOAD ON MY DEVICE?

Nope. “Experts in the industry are predicting 1,000 times an increase in data utilization over the next ten years, so our data utilization of mobile networks is doubling every year. We’re anticipating that and building for that,” O’Donnell said.

WHAT ABOUT A TIME LIMIT?

Nope. According to the City, each Link is being built to withstand 500 users at one time. “We will protect the network,” O’Donnell told reporters. “If somebody’s abusing it or hurting someone else’s performance we can send them a message or tell them to stop doing what they’re doing, or worst case we could exclude that rogue device.”

NOT EVEN ON THE FREE PHONE CALLS?

DO YOU HAVE TO STAND NEAR THE LINK, OR PLUG IN TO IT TO RECEIVE INTERNET?

The two USB charging portals require that you plug in (though they do not share any data with the Link). Phone calls can be conducted through a speaker, a headphone jack, or you can place a video call on the tablet screen (it’s an Android tablet). But the internet is wireless—the contract with the City stipulates that users must receive gigabit speed internet within 150 feet of the Link.

SO YOU’RE SAYING THAT THE CITY IS INSTALLING FIBER OPTIC INTERNET THAT IS WAY, WAY FASTER THAN WHAT I PAY TIME WARNER FOR, AND THAT IT'S 100% FREE. IF I LIVE NEAR A LINK (OR HAD A BUSINESS NEAR A LINK), WHY WOULDN’T I JUST CANCEL MY CABLE CONTRACT AND USE THE LINK?

“I don’t know why we’d stop you from doing that,” O’Donnell told us. He later added, “This is not aimed to replace Time Warner, this is really aimed to create a public Wi-Fi network on the streets of New York in all the major commercial areas where people are out and about and traveling.”

Anne Roest, the commissioner of the Department of Information Technology and Telecommunications, also cautioned against this logic: “If you think about it, 150 feet, some of these streets have really tall buildings, you’re not going to be driving Time Warner out of business.”

Yet O’Donnell told reporters that when testing the Links, his group found “broadband speeds of up to 400 feet away.” That’s around 30 stories high! “Your mileage will vary depending on what kind of device you have, depending on where you are, what kinds of obstructions are on the street.”

Pressed further on this point of chipping away at the internet oligopoly that currently exists in New York, he added, “If we can create a product where there’s no data caps, it’s really fast, where you have unlimited usage, and really good service all around the city, we hope that that would spark some changes in the industry, but we’re really excited about what we could do.”

WHAT DOES TIME WARNER THINK OF ALL THIS?

“As you can see from our TWC Wifi coverage map, Time Warner Cable provides Internet customers with free, unlimited access to more than 20,000 WiFi hotspots around NYC (and 400K+ nationwide!) so that they can stay connected outside of their home and receive more value from their TWC services,” Time Warner’s director of public relations, Eric Mangan, wrote in an email.

Simply put: if you pay for Time Warner Cable’s internet, you get it for free!

HOW WILL THEY KEEP THE LINKS FROM BEING COVERED IN BURNT HAIR AND SHEPARD FAIREY STICKERS?

The Links will be cleaned twice a week, and are "extremely rugged, made out of cast aluminum—they’re really robust and weather-tight," according to O'Donnell.

They'll also have cameras and vibration sensors on them, in case someone strikes them.

But O'Donnell hopes it doesn't come to that: "If you build a product that provides a great service that people love, people tend not to abuse it." [Ed: LOL] 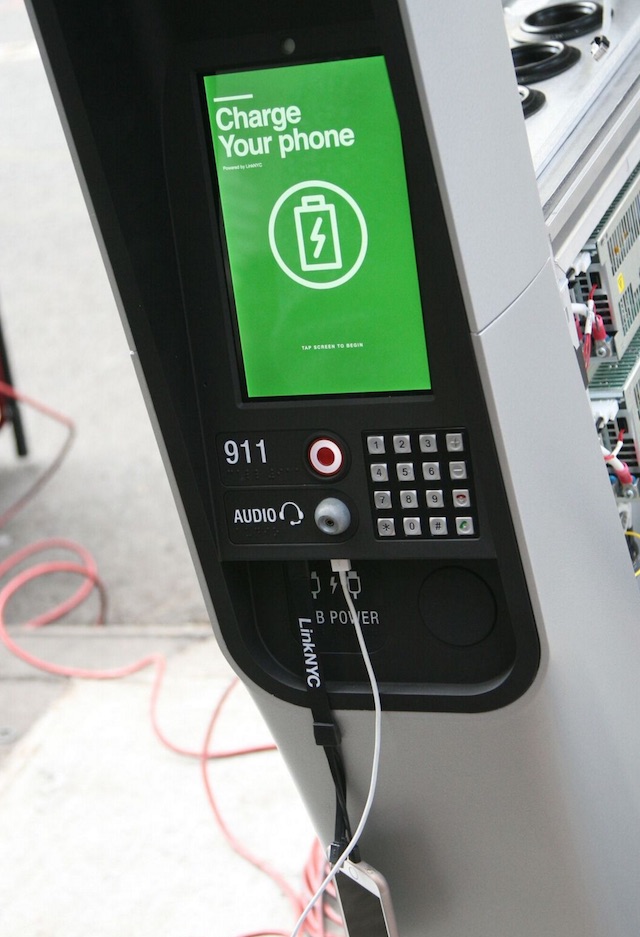 WAIT, BACK UP—WHO IS BUILDING THESE THINGS?

CityBridge, a group of companies that includes Qualcomm, CIVIQ Smartscapes, and Intersection (formerly the more sinister-sounding Control Group) won the contract from the city to build 7,500 of the kiosks over the course of 12 years—4,550 of them within four years. They’re investing $200 million to build the fiber optic network from scratch.

WHAT’S IN IT FOR THEM?

Money, through advertising. The contract guarantees $500 million in revenue to the City over a 12 year period (or the greater of 50% of the revenue that is generated) coming from ads broadcast on the giant screens on the sides of the Links. The more people around the Link location, the more money you can charge advertisers.

ARE YOU SURE THERE'S SPACE IN MY BRAIN FOR ALL THESE IMAGES THAT TRIGGER DESIRE AND THE IMPULSE TO CONSUME? NEW YORK IS PRETTY SATURATED AS IT IS, THERE'S NO QUIET SPACE TO—

Of course there is! "It’s really the first of its kind digital advertising network that’s using local data, geographic data and environmental conditions to serve the right ad to the right audience at the right time," O'Donnell explains.

Sensors on the Link might tell advertisers that it's 90 degrees outside, which would then trigger ads for air conditioning.

"We can use aggregate anonymous analytics, demographic information—think of really broad demographic info. How many people are in an area, do they skew more male or female, what kind of day is it? Right now we’re upgrading from posters that are put up on a monthly basis and now we’re able to change content every 15 seconds and really based on a particular area."

WILL THE LINKS LOOK AT WHAT I'M BROWSING AT ON THE INTERNET AND GIVE IT TO ADVERTISERS?

Yes, so long as it's anonymized. (A LinkNYC spokesperson writes in an email: "LinkNYC will not monitor web traffic on the Wi-Fi [network]." You can read their privacy policy and parse that language for yourself.)

WHAT IF THE GOVERNMENT WANTS MY PERSONAL INFORMATION?

From LinkNYC's privacy terms: "In the event that we receive a request from a governmental entity to provide it with your Personally [sic] Information, we will take reasonable attempts to notify you of such request, to the extent possible."

WHAT IF THE HACKERS WANT MY PERSONAL INFORMATION?

"It’s difficult to encrypt a large scale network with millions of users for each user but we’re deploying a new technology called Hotspot 2.0 that allows each device to be encrypted on top of all the traditional network security," O'Donnell added.

This portion of the privacy policy seems relevant and perhaps not entirely reassuring for what is essentially a public utility:

Unfortunately, the transmission of information via the internet is not completely secure. Although we will do our best to protect your information, we cannot guarantee against access to your Personally Identifiable Information by unauthorized third parties.

WHAT IS THE CITY DOING TO ENSURE THAT LINKNYC ISN'T JUST FOR WELL-TO-DO NEW YORKERS? ONE QUARTER OF US DON'T HAVE ACCESS TO FAST INTERNET.

Manhattan is getting 52% of the Links, while the other four boroughs are getting 48%. You can see the full map here.

"We’ve been working with community groups within every demographic from high school for new immigrants, people whose main experience is on an Obama phone, you know a free phone," O'Donnell said. "People who go from Brooklyn to the Bronx to get on a free Wi-Fi connection because what we consider a free Wi-Fi connection at a cafe isn’t free because you actually have to buy a coffee to enjoy it.

"But we’ve also been working with professionals uploading major files, or who want to download a movie before you jump on the train. If we could save 10% of New Yorkers half of their mobile bill, I think that’s putting hundreds of millions of dollars back into people’s pockets on a yearly basis."

Another part of the LinkNYC project is building a community center in each borough that will feature free gigabit speed internet indoors, "where people can learn about safe internet browsing, learn how to develop applications, and participate in this new internet experience," O'Donnell said.

Commissioner Roest noted that "there are people who can’t afford a data plan or don’t have much of a data plan. To think about it in terms of to find an apartment or to get your homework, and you don’t have a data plan, this is where it adds real value."

SO WHEN AND WHERE CAN I START USING THIS THING?

Roughly 15 of them will be up and running along 3rd and 8th Avenues in Manhattan by mid-January, with only Wi-Fi access to start—phone service and tablet usage will come soon after. Links will be installed in the Bronx "within the first quarter," O'Donnell said. By late summer, the City will be installing as many as 10 or more Links each day in all five boroughs.

#advertising to the rescue
#free fast internet
#linknyc
#original
Do you know the scoop? Comment below or Send us a Tip