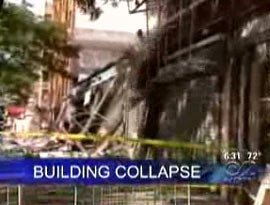 A week and a half ago, three people, including two boys, were caught when a Bronx building's parapet collapsed on top of them. Hundreds of pounds of concrete fell from a building on Grand Concourse near 183rd Street; 10-year-old Damion Hope Rosa's left leg was partially severed, and doctors later amputated it below the knee.

Now, Rosa's family is suing the building's owner, Gerald Leiblich, for $55 million. Leiblich is a developer whose holdings include the Russian Tea Room and the restaurant Beppe in the Flatiron District. According to the Post, the Rosas' lawyer Maxine Susseles stated that when Leiblich took out a $1.425 million mortgage on the building, he "had to agree to make repairs to the building, 'including but not limited to the parapet walls.'" Susseles said, "If he did the repairs, then the question becomes, 'Did he do it properly?' If he didn't do it, why not?"

And an upset Damion Hope Rosa, still in the hospital, spoke to the Post yesterday, relaying this message to Leiblich, "What happens if it was one of your sons? How would you feel if that was one of your sons or it happened to you? How would you feel? Sad? Hurt?" He said he saw two construction workers who had been working on the building, "They were going to fix it that day, and they thought there was no one down there, so they just dropped it, I think." Rosa faces more surgery and possibly further amputation to his left leg due to infection.