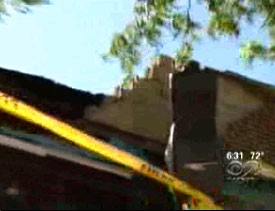 Yesterday morning, a 30-foot-long section of parapet onto the sidewalk at Grand Concourse near 183rd Street in the Bronx, injuring a women and two boys, ages 10 and 12. One boy, Damian Rosa, had his left foot amputated, while his stepbrother (or half-brother; reports differ) Frank Jones suffered a "collapsed lung, broken leg, and head injuries" as well as liver damage.

According to Rosa's grandmother, the kids were looking forward to a day at the city pool and were headed to their father's house. The FDNY says the rest of the parapet will collapse (they've created a sidewalk shed); at least a ton of wall collapsed yesterday.

Residents told WCBS 2 that the parapet above a one-story building had been leaning for a while. The Department of Buildings said the building was structurally sound but the exterior had not been kept up.

#bronx
#department of buildings
#fdny
#grand concourse
#kids
#News: NYC
#the city
#The Department
#The FDNY
#wcbs
Do you know the scoop? Comment below or Send us a Tip