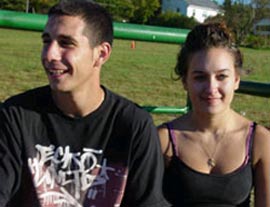 Police have arrested Thomas Paolino in connection with the murder of his girlfriend whose body was found in NJ's Pine Barrens yesterday. According to reports, the family of 19-year-old Jessica Tush said that Paolino had been "increasingly abusive" in recent weeks.

Hikers found Tush buried in a shallow grave in the Pine Barrens, which is about 55 miles away. A NJ medical examiner determined Tush was strangled, possibly with a cord. Hours later, Paolino was taken into custody at the 120th Precinct on Staten Island. On the way in, he, while wearing a booties and a Hazmat suit (the police took his clothes for evidence), spat at a NY Post photographer.

Tush was last seen on Wednesday afternoon, at the Staten Island Mall's BCBG store where she worked. She was supposed to attend a wake with another friend, but she never appeared. Her mother appeared at the BCBG store on Thursday morning, to ask the manager if he had seen Jessica; Dina Tush later posted a message on her MySpace account, asking for help. The Staten Island Advance suggests Tush text messaged a friend, saying she was being followed on Wednesday night, but "that account could not be independently confirmed."

Yesterday, Dina Tush said, "My daughter wouldn't get into a car or go anywhere with someone she didn't know. She was responsible. She always felt she could handle herself."