A young boy was hit with a broken bat during a Yankees home game on Wednesday night.

The game against the Kansas City Royals was in the seventh inning when Chris Carter's bat split and half of it went flying into the stands, striking the child in a fourth-row box seat behind the third-base dugout. Yankee Stadium medics carried the kid out as he held a cloth to his head.

"It's definitely unfortunate," Carter told reporters after the game. "You never want to have something like that happen to a kid ... or anyone. The good part of it was the bat didn't pierce him or anything. I hope he's OK." 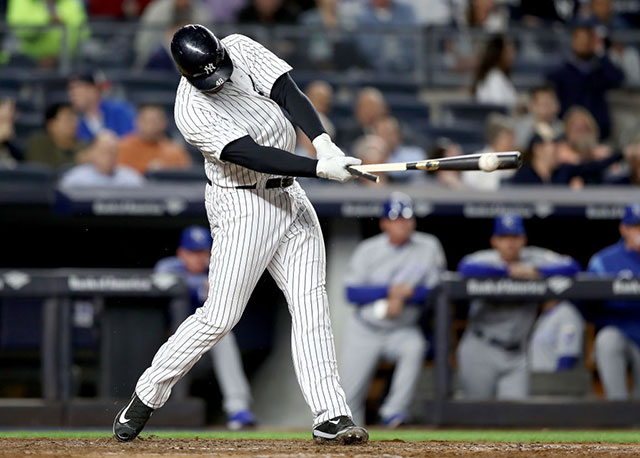 The blow seems to have only added to the boy's discomfort—reports say that he arrived on crutches, and appeared to be wearing a leg brace. He got a bat of Carter's, and could be getting more memorabilia for his troubles.

East New York Councilman Rafael Espinal called the incident "a prime example of why it is important that our teams extend their netting ASAP." Espinal introduced legislation two weeks ago that would require the Mets and Yankees to extend the netting in their stadiums to the foul poles.

Last season, Major League baseball recommended that teams extend their netting from behind home plate to behind the inner part of each dugout, which the Mets and Yankees did. Espinal argues that this is not enough, citing the over 1,750 fan injuries from foul balls each season.

The opening game of the series the night before began with center fielder Jacoby Ellsbury making a tough catch, and ringing his bell in the process.

Ellsbury stayed in the game for the rest of the inning, then left with a concussion and a sprained neck.

The Yankees didn't immediately respond to an email seeking comment.