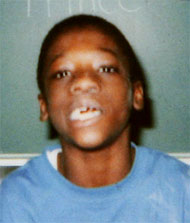 The 8-year-old boy who was in critical condition after being hit by a car on West 17th Street Friday night passed away yesterday. Prince Harris Jr., a third-grader at PS 138, had dashed ino the street from between parked cars when a Toyota Scion hit him. A witness described the impact of the accident to the Post, "The car... threw him up in the air. His sneakers were about 70 feet from where he landed."

The boy had been headed to the park with relatives around 7:45PM. According to the Daily News, his father, Prince Harris Sr., who witnessed the accident, had traveled to the city from NJ to spend the day with his son: "He said to me, 'Daddy, daddy, give me five.' He said, 'I want to go to the park.'" The driver of the car stayed behind until police arrived and was not charged with a crime.

Residents say the traffic around West 17th Street and Ninth Avenue is dangerous. One resident told the News, "The kids around here are in a lot of danger because they're out playing and these cars come speeding around the block."