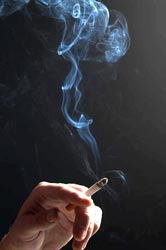 A three-year-old boy was removed from a building in the Bed-Stuy neighborhood of Brooklyn Friday afternoon. Despite efforts by EMS workers, the toddler was declared dead at Interfaith Hospital in Brooklyn. The cause of death has yet to be determined, but the young boy displayed evidence of being sexually assaulted and exhibited cigarette burns on his body. Police told neighbors that Kyle may have suffered a broken pelvis. The Daily News reports that the boy also had a broken leg and appears to have been sodomized with a wooden stick.

Ironically, three-year-old Kyle Smith, was removed from the care of his birth mother more than a year ago and placed in the home of his godmother. Neighbors described it as a relieving moment when the godmother and her boyfriend got possession of Kyle, thinking that it was a refuge from an unfit home--his mother was reportedly addicted to crack.

Both the parents of Kyle and his legal guardians are being questioned regarding his death, but it's possible that what was supposed to be a safe refuge turned out to be a haven only for sexual and physical abuse, culminating in murder.

#cigarette burns
#foster
#godmother
#Kyle Smith
#murder
Do you know the scoop? Comment below or Send us a Tip