Daniel Stedman has been a Brooklyn influencer for about as long as such a term could reasonably exist.

The founder and publisher of Northside Media, Stedman first made a name for himself in 2003 with The L Magazine, a local events guide catering to other Williamsburg arrivistes. With help from his brother Scott, he soon launched SummerScreen at McCarren Park—which now claims to be "Brooklyn's longest-running outdoor film and music series"—before striking it big with the SXSW-inspired Northside Festival in 2009. His portfolio grew again with Brooklyn Magazine, a glossy quarterly publication aimed at the wealthier end of the borough's creative class.

By 2012, a decade of successful projects were folded into the umbrella enterprise Northside Media, with Danny Stedman as the charming frontman and self-described "cultural engineer" of the borough's hip new media empire.

But interviews with writers, editors, sound engineers, illustrators and videographers tell a different story about the man credited with "shaping the Brooklyn we know today." They say that Northside Media has stolen tens of thousands of dollars in owed wages in recent years, and that Stedman is now sparring with freelancers and ex-staffers over years-old invoices ranging from $800 to $8,000. They say the "first citizen of the Brooklyn renaissance" is now in over his head and still racking up debts that some former employees suspect he will be unable to pay.

In spite of this, the Northside Festival celebrated its tenth anniversary last month with a bill of over 300 artists, ranging from Liz Phair to Deerhoof. SummerScreen, whose sponsors include WeWork, Tidal, and Vitamin Water, will present eight free movies this summer. Nearly the entire staff of Brooklyn Magazine was let go last year, but the website continues to put out new content almost daily, and maintains an office in Downtown Brooklyn.

"They've been able to bob along putting out these legit products, while at the same time essentially abusing their employees," Sarah Zorn, a former full-time staffer who was Brooklyn Magazine's food editor for six years, told Gothamist. Northside Media owes her around $8,000, which she's fought desperately for since leaving the company last October. Emails shared with Gothamist show that Stedman has repeatedly blown past his own deadlines for payment, while promising to "get us through this, if I don't die of exhaustion." 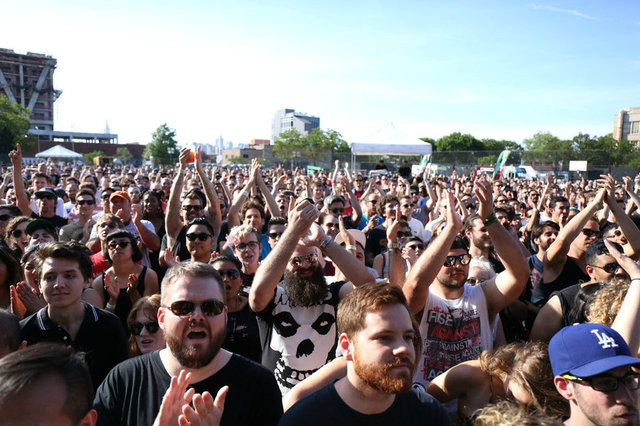 The crowd at an Against Me! set at McCarren Park during 2015's Northside Festival (Scott Lynch/Gothamist)

Zorn, meanwhile, says she was forced to go on Medicaid because of the unpaid wages. She's explained her financial desperation to Stedman, who pinned the extended delay on the company's brief acquisition by Zealot Networks—the company purchased Northside Media in 2015, though Stedman stayed on as a publisher and CEO, before officially reacquiring the group the following year. "Someone who owns a company, is commissioning work, and lives in a $3 million brownstone, has no right to ask for patience from me," she added. (Records show that Stedman purchased a $1.7 million brownstone in Prospect Heights in 2014.)

Others have been waiting even longer than Zorn. Laura Lannes, a freelance illustrator based in New York, says she has $1,300 in outstanding invoices for artwork she contributed to Taste Talks, the food-based spin-off of Northside Festival, more than two years ago. She's sent dozens of emails to Stedman, who effectively ignored her until this week, when her complaints began attracting attention on Twitter. In an email, he promised to call her with a "comprehensive update" once he returned from vacation with his family.

During a phone interview Thursday morning, Stedman declined to discuss the specifics of non-payment issues raised by former employees and freelancers. "Things are more complicated than they seem," Stedman said. "My candor is a strength and a weakness, and I'm starting to lose faith in the degree of honesty that I have treated everybody with. It is clearly doing me a disservice."

"Freelance sucks and I often have to remind people to pay me, but this is ridiculous—it doesn't seem like they have any intention to give me that money," said Lannes. After months of unanswered emails, she decided to file a complaint under the city's newly passed Freelance Isn't Free Act, the country's first ever law protecting freelancers and independent contractors from nonpayment. "I placed a complaint, followed up, and never heard anything," she noted. "That was frustrating because I feel like this falls square in the middle of what that was supposed to resolve."

Her frustration was further compounded in recent weeks after learning how many others claim they've been swindled by Stedman. Since her tweets began circulating, she's heard from at least half a dozen people who say they are still waiting on payment for work they did for Northside Media. "It turns out, I'm the one who's owed the least," Lannes said with a laugh.

In 2016, our team (@eatourfeelings) billed Northside (@brooklynmag, @NorthsideFest) $7k for a video series. After a year of refusing to pay, they offered a $3.5k settlement, & we took it. They're still stiffing freelancers like @LauraLannes & @TheJoshElkin. #WageTheft is not ok. https://t.co/CdeMENNo0q

They still owe me money... it's been over a year 😡

Asked how the company was able to withhold payment from this many people without facing any consequences, ex-employees pointed to a range of factors, including the brands' cultural cachet, the difficulty of speaking out as a freelancer, and Stedman's personal managing style.

"He managed to surround himself with super talented, passionate, self-motivated artists of all forms who felt a personal investment in the larger product —festivals, magazines, whatever—and were going to make sure it gets out there whether they're getting any support," said Zorn. Even as unpaid invoices started piling up, Stedman was a "charismatic leader," according to Zorn, who said Stedman is adept at convincing people that their long-awaited payday was just around the corner.

Another former full-time editor, who asked not to be named, told Gothamist that Stedman should be viewed somewhere between "well-meaning buffoon" and a "calculating, rich kid sociopath who commissioned people with no intention of ever paying them."

"At a certain point, the only way someone can even afford to be as blithely oblivious as he was is if they have no idea what it means to suffer or struggle financially," the employee added.

Others, meanwhile, pointed to the harsh realities of the current media landscape, and fear of speaking out as a freelancer. "You don't want to be labeled difficult, or to hurt your prospects in the job market. It felt like a bad idea to make a big fuss," noted one longtime employee, who also asked for anonymity.

"The whole thing just feels like a case study of poorly run media and how bleak the situation can be for freelancers," echoed Abbey Bender, a contributor to The L Magazine and Brooklyn Magazine, who said she is still waiting on payments for pieces she wrote in 2016 and 2017. Several others expressed similar concerns that publicly demanding to be paid by Stedman could hurt their future employment prospects elsewhere.

Attempts to bring legal action against the company have yielded mixed results so far. Zorn says that she served Stedman with a lawsuit last month, but that he still hasn't responded. Alex Jones, a freelance sound engineer who worked various jobs for Northside Media beginning in 2014, told Gothamist he took Stedman to small claims court, and that he "seemed extremely eager not to have this case go in front of a judge even though he kept insisting that I had no legal grounds to sue him." The two eventually settled in arbitration for the original $878.29 that was owed, though the engineer says he was stuck paying for court fees.

At the time, Jones recalls that Stedman seemed "very, very concerned that I was going to tell Wired magazine or someone like that" about the outstanding debt, and tried to make him sign a non-disclosure agreement as a condition of the settlement. "We did have a handshake agreement for me to not tell anyone about this," he added. "But fuck that guy. My concern is with other workers and not grifter parasite bosses like this asshole."

#brooklyn magazine
#danny stedman
#northside
#northside festival
#northside media
#publishing
#summerscreen
#the l magazine
#original
Do you know the scoop? Comment below or Send us a Tip
A new Gothamist is coming! We’ve moved comments over to our beta site. Click here to join the conversation and get a preview of our new website.