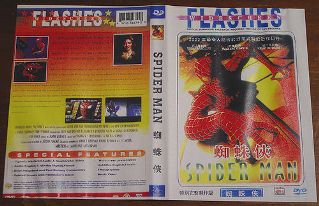 Last year movie piracy became a misdemeanor in New York, making it that much harder to watch a shaky-cam version of a summer blockbuster before it even closes out its opening weekend in theaters. Bloomberg has been cracking down on counterfeiters city-wide, and while he's brought equal attention to the fake purse racket, The NY Times focuses in on the blurry bootlegs.

Shari Hyman is the director of the mayor’s office of special enforcement, and has revisited Canal Street many times to bust some "businesses" -- and her job is getting harder. A year after the crackdown, there just aren't very many left. Where fake Fendis still sat pretty on the sidewalk, pirated DVDs had all but disappeared.

In a neighborhood full of blankets and sidewalk “offices” with everything a shopper might find in a boutique uptown, Ms. Hyman was coming up empty-handed. “We tried to buy DVDs,” she said, “but we could only get one woman to come out into the street, and she had them stuffed into her jacket.”

In a February sweep, the organization checked out three buildings and 32 storefronts for bootlegged DVDs, and found none.

Where did they all go? Piracy runs rampant on the internet still, and while the movie industry is fighting it, peer-to-peer file-sharing networks are costing them some serious cash. In 2005 it was estimated that around $18.2 billion was lost through piracy. While most of the operations are still amateur (hand-held cameras in movie theaters), there is web distribution, which "reduces the criminal’s capital outlay to near zero."

To stop the online operations, new technology is being created, including a program that finds the IP addresses of individuals who download the bootlegs. So if you just had to see Prom Night before it hit the big screen, your own horror story may just be getting started.