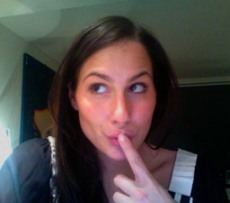 Tameka Rachelle Lewis, a University of Virginia graduate now immortalized as the prostitution ring booker who confirmed an escort's visit with Governor Spitzer, has pleaded guilty to promoting prostitution and money laundering.

Lewis was taped by the FBI when she spoke to Alexandra Ashley Dupre (pictured), whose escort name was "Kristen." She told Kristen that "Client 9"--believed to be Governor Spitzer--"would ask you to do things that, like, you might not think were safe - you know - I mean that ... very basic things."

Lewis could face up to 25 years in jail, but federal sentencing guidelines could mean a shorter term. The Times reports that as part of her plea, she will "testify, if asked, before a federal grand jury" about the prostitution ring. The other defendants, including 62-year-old Mark Brener who ran the operation and his 23-year-old girlfriend Cecil Suwal, may be negotiating deals as well.

Yesterday, the Times suggested Lewis's plea could also mean federal prosecutors are near a decision on Spitzer.

#Ashley Alexandra Dupre
#emperors club vip
#Governor Spitzer
#hookergate
#Kristen
#prostitution
Do you know the scoop? Comment below or Send us a Tip